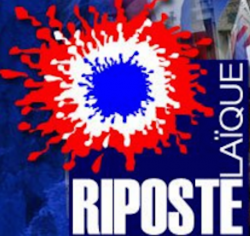 Riposte Laïque (English: Secular Response) is a French anti-Muslim organisation and website founded in 2007 by Pierre Cassen and Christine Tasin.[1]

According to the self-defining counterjihad blog Gates of Vienna, it is one of the two most prominent French counterjihad groups (the other being Résistance Républicaine).[2]

The group officially rejects any affiliation with any party.

Their official ideological line is that they are a 'secular left-wing' group, fighting for 'secular' and 'French' values and identity. Pierre Cassen justifies their many affiliations with extreme-right groups, such as the Front National or Bloc Identitaire by stating that they are the only ones that understand the 'menace' ahead of them: the 'Islamification of France'. The group defends their Islamophobic positions, rejecting the 'racist' or 'extreme-right' label.

Moreover, Cassens is 'convinced that traditional alliances will explode. The real rift is between the defense of our Republic against those who, with a "globalist" ideology, want to destroy France'. Hence the 'holy alliance' (a term used during the First World War to describe the 'unity' of all French parties during the war) [3] with the extreme-right against 'Islam' and its defenders (may they be Muslims or left-wing 'cosmopolitans') is justified. [4]

In 2010, the secretary general of l'Union des familles Laïques and chief editor of Respublica Nicolas Gavrilenko stated that Cassen's 'conception of 'secularism' completely banishes any trace of religion within civil society' ("Sa conception de la laïcité bannit toute trace de religion dans la société civile") [4] as opposed to the original concept of 'laïcité', which is a promise of non-interference from the part of the State in religious affairs. The 'laïcité' law of 1905, often referred to by the group, was originally created against state funding of Christian churches, schools and other institutions, as well as against the interference of the church into state affairs.

Such misuse of the term 'laïcité' could also be seen in the discourse of senior officials in Francois Hollande's government. The vice-president Manuel Valls declared himself to be a 'demanding secularist' ("Je soutiens une laïcité exigeante ") in 2014 [5]. In August 2016, he defended the 'burkini ban' by stating that 'the burkini is not compatible with French values', i.e. gender equality and secularism [6] thereby seemingly equating 'laïcité' with Cassen's definition of it. The term was once more misused in 2016, when it was revealed in September that a 2014 State-written history textbook had put down the wrong definition under 'laïcité'. In it was written that 'in France, 'secularism' also supposed the refusal of any religious-based expression in the public domain' ("En France, la laïcité suppose aussi le refus de toute expression religieuse dans l'espace public") [7]

The founder Pierre Cassen claims to have left ResPublica in 2007, a left-wing newspaper, for not being 'anti-Islam' enough. [8]

In 2010, the contributors of Riposte Laïque were officially politically diverse. Pierre Cassen and other founding members called themselves 'left-wing' and come from a 'trotskyist' background [9]. Other members, such as Maxime Lépante (self-proclaimed expert of the islamization of the 'Goutte d'Or' borough), were 'right-wing', old Debut la République militants, while a few declared their support for the Front National. [8]

The movement officially allied with the extreme-right Bloc Identitaire movement during their joint 'wine-and-sausage appetizer' in June 2010, which prompted certain contributors to leave the movement. [10]

The movement split again over diverging opinions on gay marriage in 2013, which lead to the creation of a third association, named Reconquête Républicaine and presided by Pascal Olivier. [11] [12]

The blog is edited abroad - by the association Riposte laïque Suisse - since October 2012, due to the number of lawsuits filed against the website. This has not protected them, however, and the blog is being sued for incitement to hatred as of 2016. [13]

In 2013, the Legal Project arm of neoconservative Daniel Pipes's Middle East Forum announced it was defending Christine Tasin in court over charges of incitement to hatred. The same body had previously defended Geert Wilders against similar charges. Tasin's lawyer, Joseph Scipilliti, defended her case by claiming that she was attacking Islam itself and not the individuals who identify with it, and that, by provoking a debate around Islam's ideas, she had simply exercised her right to free speech. He pointed to a case where a rapper had been released from similar charges because his lyrics allegedly criticised the French state, as opposed to the 'French people as a whole'. Tassin's condemnation was successfully overturned in December 2014. [14]

In 2010 the organisation, along with Tasin's Résistance Républicaine, planned an "apéro saucisson-pinard" (a 'sausage-and-wine appetizer') in an ethnically diverse borough of Paris. the leader Christine Tasin justified it by stating she was 'reclaiming a street that was taken illegally' from the 'French people'. She clearly wanted to shock the Muslim population living there, as it is not within their general practice to eat porch or to drink alcohol. Moreover, she claimed this action was a symbolic defense against the 'Islamic offensive'. The event changed location to the Champs Elysées at the last minute, with around 800 people attending. [15] [8]

Inspired by the PEGIDA protests seen in Germany, the group called for rallies across France on 18 January 2015, under the slogan 'Islamists get out of France'.[16] Leader Pierre Cassen said he had invited leaders from the German section of PEGIDA to the Paris demonstration and also leaders from Italy and Switzerland he felt had 'led by example in protest against the Islamisation of Europe'.[16]

They also joined forces once more with Résistance Républicaine, Renaud Camus and Bloc Identitaire (led by Bruno Larebière) to launch a French section of PEGIDA, presided over by Loïc Perdriel, aged 25 at the time. [17]