Paul Hogan is a police officer from Scotland who worked for the National Public Order Intelligence Unit (NPOIU) in London between January 2003 and July 2007, before returning to the Tayside Police in Scotland, and leaving the force in February 2015.

As NPOIU field officer, he coordinated the deployment of undercovers during the protest against the G8 in Heiligendamm, Berlin, in 2007 (this included the activities abroad of the known NPIOU officers Mark Kennedy and Marco Jacobs). Hogan also visited many EU member states to share his knowledge on the workings of animal rights activism and to set up protocols for the exchange of intelligence.

The profile of Hogan's career is exclusively based on his expansive LinkedIn profile, which was taken down a day after it started circulating on Twitter in April 2016 and sparked press attention. As such, this profile is a work in progress. If you have more detail please get in touch.

The amount of detail in Hogan's LinkedIn profile was quite astonishing and breached the policy of Neither Confirm Nor Deny (NCND) policy that Scotland Yard adopted after the first undercover police officer, Mark Kennedy was exposed in late 2010/early 2011. Despite apologising to and settling the court case brought by eight women previously in long-term intimate relationships with undercover officers, the Metropolitan police has steadfastly clung onto this NCND policy.

Hogan's résumé was discovered just as the police were fighting to keep the Undercover Policing Public Inquiry behind closed doors (Chairman Judge Pitchford's ruling on this is expected 3rd May 2016) in a further effort to prevent disclosure of operational details and the undercover units' methods.[1] 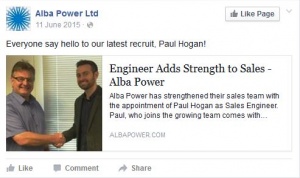 Paul Hogan's first experience with intelligenc gathering was as a Detecitive Constable with Tayside Police in Scotland. He says he was working 'within a specialised department ... responsible for the acquisition and development of information / intelligence into matters which could have an impact on local and national public order.' He would 'deploy in complex covert operations and exercises locally and throughout the UK.'

After that, Hogan worked for the National Public Order Intelligence Unit (NPOIU) for four-and-half year, including as a senior manager within the unit. He describes it as 'a National Unit responsible for gathering, assessing and disseminating intelligence relating to Domestic Extremism, including Animal Rights, Left & Right Wing Extremists and Environmental Extremism'.

During this first secondment, he claimed to have worked with covert assets throughout the UK 'to assist with the planning, preparation and implementation of any operational policing response to planned demonstrations where there was potential for extremist activity'. One step up, promoted to 'Intelligence Manager / Field Officer Administrator', Hogan would then coordinate five Field Officers who had liaison responsibilities across all police forces within the UK. 'Managed the collection, assessment and dissemination of Domestic Extremism intelligence received through covert operations. Ensured through regular audit that appropriate legislation was adhered to for all covert assets.'

During this period, he also contributed to 'critical plans' for the G8 Summit in Gleneagles 'to ensure maximum intelligence dividend'.

Hogan reveals in great detail how in 2007 the NPIOU was invited to Germany to export its experience of spying on anti-G8 activists accrued at the 2005 Gleneagles summit in Scotland, to help colleagues there prepare the infiltration of similar protests in Heiligendamm.

This was the first of a meaningful collaboration between the NPOIU and the German authorities and contributed to their strategic planning leading up to the event in 2007.

Questions raised in the German Parliament confirmed that German undercovers came to Gleneagles for the G8 protests in 2005; and that British undercovers Mark Kennedy and Marco Jacobs were involved in the preparations leading up to Heiligendamm, and attended the demonstrations.[5][6] (Cooperation between German police and the British spy units stretches at least as far back as 1995, when undercover SDS officer Peter Francis was infiltrated into a Youth Against Racism in Europe group, which went on a summer camp to the Bavarian Forest (with his cover officer Bob Lambert travelling over as well.[7])

The timeline below shows the undercover officers exposed so far on infiltration missions while Hogan served with the NPOIU January 2003 - July 2007.

Cooperation with Finland and other European countries, and with corporations

Hogan started spreading the word early on in his career, first in his capaciy in Intelligence Management with the Tayside Police, 'presentations to colleagues and key industry partners on the work of the department in order to develop intelligence sharing opportunities and maximise opportunities'. He continued to do so with the NPOIU:

As part of my remit I would provide presentations on the capabilities of the unit to a wide range of partner agencies and interested parties including all law enforcement bodies within the UK and interested commercial partners such as the pharmaceutical industry, often the victim of unwanted Animal Rights extremism.

Hogan also presented on behalf of NPOIU at a European conference on animal rights, which took place in Finland sometime between January 2006 and July 2007.[8] As Hogan notes, 'given our experience, UK police were considered to be significant leaders in combating this type of extremism', and he was subsequently invited to other European member states to develop information sharing protocols.

The remits of the Pitchford Inquiry into undercover policing are limited to operations by English and Welsh forces operating in England and Wales. For several reasons, Scottish MPs have been pushing for quite some time to have Scotland included in the Pitchford Inquiry, or to have a separate national investigation.[9] Not only is there a long list of exposed undercovers who have been active on Scottish soil. Hogan's work as an undercover specialist took place in Scotland and all over the UK. His own career path shows that there is considerable cooperation between the Scottish police and the undercover units.

Hogan is only one of past and current Scottisch police chiefs who have been responsible for what the press north of the border calls the 'sex spy scandal'. The Sunday Herald revealed in March that Eleanor Mitchell, who was head of Police Scotland’s Professional Standards Department before retiring in 2016, was also linked to the NPOIU. Her biography states she was an expert in animal rights and environmental extremism who was seconded to the London force for six years until 2006. This makes the two Scottish officers Hogan and Mitchell colleagues in the NPIOU at management level between 2003 - 2006. Furthermore Phil Gormley, now Scotland’s Chief Constable was in the Met from 2003 to 2007. From 2005, he was head of Special Branch and was on the committee who oversaw the NPOIU and the Special Demonstration Squad.[10][11][12] Later, ACC Ronnie Liddle, was ACPO ACC for Counter Terrorism in the period December 2012 – February 2014. Based at the Metropolitan Police he was co-ordinator of 'UK Counter Terrorism functions and operations', part of which remit he had responsibility for National Domestic Extremism and Disorder Unit, the new name of the undercover unit. 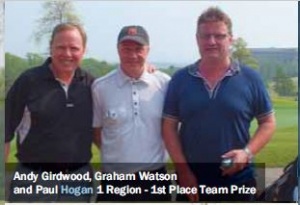 Hogan was Treasurer and Publicity Officer of the Tayside Branch Committee of the International Police Association (IPA). The IPA is a networking group for police officers and former ones with members from all over the world, founded in the UK in 1950. Apart from the Golf Society, the IPA has a Caravan & Camping Group a Motercycle Group and Radio Clubs[14] Hogan joined in 2009; in 2012 Publicity Officers met up for the first time to share ideas of how to promote the International Police Association (IPA).[15][16][17]

Vice chair of the Tayside Branch is Ross Mitchell, who is also on the IPA golf team with Hogan.

Hogan is a member of the Tayside Police Golf team,[18] and of the IPA golf team.[19] Both teams have won many prizes.

As personal interests, Hogan listed 'Keep fit, Travel and Golf' at his profile. The Facebook page of his current employer Alba Power mentioned Hogan playing a golf tournament in Turkey with a group of friends, some of whom from his time with the Tayside police, while sponsoring a good cause.[20]