Newswatch (officially Newswatch UK Ltd) is a right-wing media monitoring company. It was incorporated on 6 September 2007 and is co-owned and directed by the right-wing activist David Keighley and a managing consultant called Barclay Thompson. [1] It went out of business in 2009 but was subsequently resurrected.

Shortly after Newswatch was founded, its Managing Director Barclay Thompson was quoted by the Guardian's Roy Greenslade as saying: 'Today's media has enjoyed an easy ride, and thinks it can get away with murder. But, from now on, it will have to think twice.' [2] According to Greenslade:

[Keighley] argues that the complaints procedures of the various media regulators - the BBC Trustees, Ofcom and the Press Complaints Commission - are "rather gruelling". Instead, he is urging businesses and institutions that want to "fight back" to use his new outfit. (He doesn't say how much he will charge for his services).

What he does say is that Newswatch will "use a range of robust analytical tools to study the British broadcast media. Our methodology is firmly based on established academic principles utilising core quantitative and qualitative research techniques." [3]

Newswatch was the successor of Minotaur Media Tracking which David Keighley co-owned with Kathy Gyngell, a former TV-am producer and the wife of Keighley’s former boss and close friend Bruce Gyngell. [4] Kathy Gyngell is listed as one of four team members on the Newswatch's website along with Keighley, Barclay Thompson and the company’s main researcher Andrew Jubb. [5]

Newswatch's predecessor Minotaur Media Tracking produced a number of reports for the Eurosceptic think-tank Global Britain and the Centre for Policy Studies. The great majority of these reports alleged a bias in favour of EU integration in the UK media (particularly the BBC) and several alleged a broader bias against right-wing politics and the Conservative Party.

The company filed an application for striking-off on 2 September 2009 and was dissolved on 29 December that year. [6] 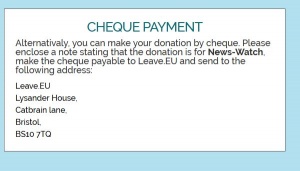 In 2013 Newswatch was still functioning: according to filings at the Charity Commission it was given £40,000 by the conservative foundation the Institute for Policy Research.[7]

In October 2017 Newswatch published a pro-Brexit report but claimed it was independent of the Brexit lobby. However its website was soliciting donations to be paid to Leave.EU.

Roy Greenslade, 'Media bias is in the eye of the beholder', Guardian Media Blog, 10 October 2007