Following the discovery that a number of journalists were included on the National Domestic Extremism Database, the National Union of Journalists encouraged members to find out whether they were on it too, and supported the action of comedian and journalist Mark Thomas in his efforts to have his files deleted.[1]

In 2014 the Network for Police Monitoring (Netpol) announced the campaign: "Don't Feed The Feds - Don't Be On a Database", encouraging people to assert their right not to end up on the domestic extremism database.[2][3]

This page is an overview of people who successfully accessed their files, and a list of related campaigns. 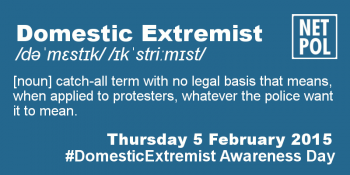 In 2014 it emerged that a number of journalists were recorded on the database,[4] following a series of Subject Access Requests. Fears that journalists were being targetted by police had been featured back in 2007,[5] and were highlighted again at the Kingsnorth Camp for Climate Action in 2008.[6] However, subject access requests showed that the history is much longer, some entries dated back to 2000 (as in the case of Jess Hurd)[7] and others had details of sexual orientation.[8]

All in all, there were over 2000 bits of information on the database relating to journalists.[9]

In protest, the National Union of Journalists has launched a court case on behalf of six of their members (two journalists, and four photographers).[10]

Metropolitan Police Commissioner Bernard Hogan-Howe responded that the police did not 'routinely collect' information on journalists and their sources, and that they only took an interest in peole if they were either victims or suspects.[11] However, he accepted that files on journalists who were not criminals should be destroyed.[12]

Andrew Wood is an anti-arms trade activist who attended a protest against the DSEI arms fair in 2005 and was photographed by police. His file shows the means the police used to learn his identity. When they eventually succeeded, they created a file on Mr. Wood even though he had never been arrested.[13] The police argued in court that the photographs were retained within the Public Order branch of the Metropolitan Police, where they would remain - the exemption being if they were to form part of a 'spotter card', which would be distributed only to FIT or Evidence Gatherer teams.

Following various appeals, the Supreme court ruled that Article 8 (right to respect for private life) of the European Convention on Human Rights had been engaged, and that the police had been wrong to keep the image once it was clear no offence had been committed.[14] Though the case does not mention the National Public Order Intelligence Unit, it set authority for its ability to retain such images, something that then parent organisation ACPO acknowledged in 2011.[15]

John Catt was an anti-war protestor who had attended protests by SmashEDO against arms company EDO MBM Ltd in Brighton, and had learned that various details relating to him had been recorded on the National Domestic Extremism Database. He filed a case against ACPO and the Commissioner of the Metropolitan Police. [16]

Catt argued that as someone without any convictions who was exercising his lawful right to protest his details should not be on the database in the first place. Their recording amounted to a breach of his Article 8 rights.

DCS Adrian Tudway, then National Coordinator Domestic Extremism, argued that it was necessary to retain them for the lifetime of the SmashEDO campaign:

Mr. Tudway says that there is value to the police in knowing the identities of those who attend protests organised by Smash EDO and similar groups, even if they have not themselves been convicted of any offence. He accepts that in general only a small proportion of those attending protests of this kind resort to unlawful behaviour, but he nonetheless asserts that it is necessary for the police to retain information about potential witnesses and associates of those involved in unlawful activity for planning purpose and also for the purposes of eliminating law-abiding persons from the need for particular police attention.

Tudway also said that they needed to monitor Catt because he 'associates closely with violent members of Smash EDO and knowledge of this association is of intelligence value'.

The judges at the hearing said such general terms were not sufficient, and also that:

...we are left with the clear impression that police officers who attend protests organised by Smash EDO for the purpose of gathering intelligence record the names of any persons whom they can identify, regardless of the particular nature of their participation.

The police were ordered to delete Catt's details from the National Domestic Extremism Database as a violation of his human rights.[17] The Metropolitan police subsequently appealed the Court of Appeal March 2013 judgement, resulting in a three day hearing at the Supreme Court in December 2014.[18]

The Supreme Court handed down their judgement on 4 March 2015, finding in favour of the police's right to retain material acquired during surveillence of otherwise lawful protest.[19] The Network for Police Monitoring, which had made a submission to the case, in the wrote of the decision:[20]

[The judgement] allows the police extraordinary discretion to obtain and retain the personal information of protesters whenever they consider it useful for purposes that are never fully defined, but that include investigating the ‘links between protest groups’ and their ‘organisation and leadership’. The Supreme Court has accepted that no further justification is apparently required.
We believe their judgement amounts to judicial approval for the mass surveillance of UK protest movements. It affirms the Metropolitan Police’s stated belief that anyone taking part in a public protest has no reasonable expectation of privacy.

This ruling allows the police extraordinary discretion to gather personal information of individuals for purposes that are never fully defined. The Supreme Court has accepted that no further justification is apparently required other than investigating the ‘links between protest groups’ and their ‘organisation and leadership’.

Though a number of people were able to access their files on the database, it appears that the Metropolitan police adopted a policy of neither confirming or denying that individuals and groups were on it.[22] In May 2013, The Network for Police Monitoring (Netpol) announced that they were seeking a judicial review[23] into the Metropolitan Police, claiming that they were systamtically failing to confirm to activists whether or not they were on the database, despite being required under the Data Protection Act. They also called on the Information Commissioner to to investigate and take action.[24] The judicial review is awaiting the judgement of the Supreme Court hearing in the case of John Catt (see above).[25]

Are you on the domestic extremism database? 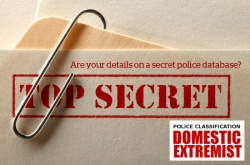 NetPol banner: Don't Feed The Feds - Don't Be On a Database

Various political activists of different backgrounds made Subject Access Requests under the Data Protection Act and indeed received the information held on them. These records have shed considerable light on the extent of monitoring of activism by the police.

In January 2016 The Guardian revealed that a whistleblower from the Domestic Extremism unit, DS David Williams, had written a letter to Jenny Jones, deputy chair of the body overseeing the Metropolitan Police. In it he stated that the unit had been involved in a systemic destruction of records as part of an illegal cover up to suppress the extent to which they had been spying on her.[33]