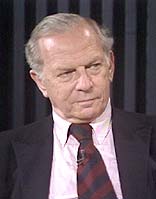 Sir Michael Eliot Howard, OM, CH, CBE, MC (born 29 November 1922) is a retired UK historian (not to be confused with the former Conservative leader Michael Howard) founded the Department of War Studies at Kings College London and was instrumental in the founding of the establishment think tank the International Institute of Strategic Studies based in London.

He is formerly Chichele Professor of the History of War and Regius Professor of Modern History at Oxford University, and Robert A. Lovett Professor of Military and Naval History at Yale University. Howard was educated at Wellington College and Christ Church, Oxford (with service in World War II in between). During Second World War, Howard was commissioned in the Coldstream Guards and fought in the Italian Campaign. He was twice wounded and won a Military Cross at Salerno.

After Oxford, Howard began his teaching career at King's College, London, where he created the department of war studies. From his position at King's he was one of the Britons most influential in developing strategic studies as a discipline that brought together government, military, and academia to think about defence and national security more broadly and deeply than had been done before. He was one of the founders of the International Institute for Strategic Studies. From his family, education, and service in the Guards he had extensive connections amongst elite levels of British society. He had close connections in the Labour Party but was also used as an advisor by Margaret Thatcher.

Howard helped found the Department of War Studies and the Liddell Hart Centre for Military Archives at Kings College London. He is currently president emeritus of the International Institute for Strategic Studies, which he also helped to establish, and a fellow of the British Academy. Sir Michael was knighted in 1986 and was appointed to the Order of the Companions of Honour in 2002 and the Order of Merit in 2005.

He is best known for expanding military history beyond the traditional campaigns and battles accounts to include wider discussions about the sociological significance of war. In his account of the Franco-German War of 1870-71, Howard looked at how the Prussian and French armies reflected the social structure of the two nations. He has also been the leading interpreter of the writings of Carl von Clausewitz in the late 20th century.

His first major work, THE FRANCO PRUSSIAN WAR (1961) was awarded the Duff Cooper prize. His second, Volume IV in the Grand Strategy series of THE OFFICIAL HISTORY OF THE SECOND WORLD WAR (1972) received the first Wolfson Award for History. Of his shorter works, WAR IN EUROPEAN HISTORY (1976) has been translated into sixteen languages and THE INVENTION OF PEACE (2000) received the Political Book Prize from the Freidrich Ebert Stiftung in Berlin. He was joint translator and editor (with Professor Peter Paret) of CLAUSEWITZ ON WAR (1976), for which he received the Samuel Eliot Morison Prize for Military History.

He has also received the Chesney Gold Medal from the Royal United Services Institute, the NAT Atlantic Award, and the Paul Kitze Award from the US Center for Naval Analysis. He is President Emeritus of the International Institute for Strategic Studies, of which he was a joint founder.

He has held Chairs at King's College London (where he established the Liddell Hart Center for Military Archives and is commemorated by a named Reading Room and a portrait by Anthony Palliser); Stanford; Yale; and Oxford University, where he held the Regius Chair of Modern History from 1980-1989. He now lives in West Berkshire where he continues to write, garden, travel and listen to music.[1]

"In the spring of 1960 the Ford Foundation gave me a generous grant to tour the USA and visit the universities and institutions where strategic studies were beginning to sproat...Cynics would now say that I was being brainwashed, but if this was so it proved very effective." [2]

On his tour Howard visited the major American universities as well as the Council on Foreign Relations, the Hoover Institution on War, Revolution and Peace, the Stanford Research Institute and the RAND Corporation. He met with influential figures in American strategic policy including Samuel Huntington, Zbigniew Brzezinski, Walter Lippmann, Joseph Nye and Henry Kissinger. He also became lifelong friends with Albert Wohlstetter and his wife Roberta, although they disagreed on nuclear strategy.[3]

Howard took up his position as Chichele Chair of the History of War at All Souls College, Oxford in autumn 1968. The post was made available after the Ministry of Defence had provided five years funding as part of a propaganda initiative by Howard's IISS co-founder Denis Healey, who was now Secretary of State at the Ministry of Defence. Howard gives the following account in his memoires:

As part of his campaign to create a public as well educated about defence as it was about economics, Denis Healey planned to strengthen the links between the armed forces and the universities, and set up a committee under his Permanent Under-Secretary, Sir James Dunnet, to see how this might be done. I cannot remember whether I was formally a member of that committee, but I spent a lot of time with it and helped to shape its recommendations...It would finance 'Defence Lectureships', academic posts relevant to defence questions in universities willing to host them. Lectureships were created in such topics as Soviet Studies, Defence Economics, International Relations, International Law and Ethics of War, modelled on courses that we were teaching at Kings. One academic body that responded positively to this invitation was All Souls College, Oxford. [4]

Howard recalls that he was urged to apply for the position by Max Beloff after an IISS seminar in Autumn 1966. Beloff was then a fellow at All Souls and according to Howard a 'loyal supporter of IISS'. [5]

Howard applied and was later offered the post but only after Laurence Martin had turned it down. After Howard took up the post at All Souls, Laurence Martin took his chair at King's College and became head of the Department of War Studies. [6]

To the Foreign Office

In the 1960s Howard turned down an offer to act as an academic advisor to the Foreign Office Disarmament Research Unit, which he describes as being set up "mainly to read and commment on the flood of material produced by American think-tanks. The post was filled instead by Hedley Bull. Howard did however write memoranda for the Foreign Office and sat on their Disarmament Advisory Committee - a body "many of whom saw as a device to keep Labour back-benchers quiet." [7]

To the Ministry of Defence

Whilst Denis Healey was Secretary of State for Defence, Howard advised him on his overhaul of the services, particularly the proposed restructuring of the educational institutions (such as Sandhurst and Dartmouth). Together with Cyril English, Howard authored the Howard-English Report. Submitted in July 1966, the report suggested that the intellectual broadening of non-technical officers should occur through the establishment of a “Royal Defence Academy” in Shrivenham where recruits would spend two years in prior service and then be enrolled in a 1-3 year program. It proposed to separate academic study from purely military study by providing a 3 year break from military service to be devoted to education. [8] The changes were rejected by the military and Howard called the report a "complete waste of time". Still, he was rewarded with the chairmanship of the Army Education Advisory Board, a post which he said, "involved doing virtually nothing but looked good on my c.v." [9]

In early 1980 Howard was invited by Margaret Thatcher to lunch at Chequers. Thatcher had been advised by the Foreign Office that the Soviet Union did not pose a serious military threat, so she invited Howard and other right-wing experts to take part in a committee offering 'independent' advice:

In the USA a group of hawks formed a well funded Committee on the Present Danger, consisting largely of pupils and associates of Albert Wohlstetter, who urged the breaking off of arms-control negotiations and massive rearmament. Mrs Thatcher was temperamentally inclined to agree with them. The Foreign Office was not. Not surpringly, the Prime Minister sought further options...She asked Hugh [Thomas] to set up a small committee to draft independent recommendations for the conduct of British foreign policy consisting of myself, Leonard Schapiro and Elie Kedourie...We put together a totally incoherent docuement which deserved to go straight into the waste paper basket and probably did. I continued to be invited to Chequers seminars and always found the Prime Minister friendly and courteous. But she was not easy company, lacking as she was in any sense of humour, and increasingly impervious to new ideas. [10]

Howard recalls that Leonard Schapiro and Elie Kedourie "believed the recently concluding Helsinki Accords had been a defeat for the West by 'legitimizing' the Soviet control of Eastern Europe." Howards says he was sceptical of the worst case scenario peddled by the Committee on the Present Danger but "believed strongly in the need to preserve credible deterrence". [11]