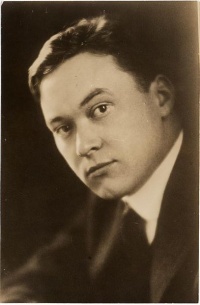 Portrait of journalist Walter Lippmann by the photographer Pirie MacDonald

Walter Lippmann, the son of second-generation German-Jewish parents, was born in New York City on 23rd September, 1889. While studying at Harvard University he became a socialist and was co-founder of the Harvard Socialist Club and edited the Harvard Monthly.

In 1911 Lincoln Steffens, the campaigning journalist, took Lippmann on as his secretary. Like Steffens, Lippmann supported Theodore Roosevelt and the Progressive Party in the 1912 presidential elections. Lippman's book, A Preface to Politics (1913) was well-received and the following year he joined Herbert Croly in establishing the political weekly, the New Republic.

Lippmann rejected his earlier socialism in Drift and Mastery (1914) and in 1916 became a staunch supporter of Woodrow Wilson and the Democratic Party. In 1917 Lippmann was appointed as assistant to Newton Baker, Wilson's secretary of war. His role was propaganda. Lippman worked closely with Woodrow Wilson and Edward House in drafting the Fourteen Points Peace Programme. He was a member of the USA's delegation to the Paris Peace Conference of 1919 and helped draw up the covenant of the League of Nations.

It was his experience as a propagandist which convinced him of the possibility and the necessity to use propaganda and PR to manage popular opinion. His most remembered contribution was to coin the phrase Manufacture of consent - a phenomenon of which he approved.

In 1920 Lippmann left the New Republic to work for the New York World. His controversial books, Public Opinion (1922) and The Phantom Public (1925), raised doubts about the possibility of developing a true democracy in a modern, complex society.

Lippmann was present at the founding meeting of the Mont Pelerin Society and shared with Hayek and others the view that ordinary people needed to be managed by enlightened experts in the interests of great power.

Lippmann became editor of the New York World in 1929, but after it closed in 1931, he moved to the New York Herald Tribune. For the next 30 years Lippmann wrote the nationally syndicated column, Today and Tomorrow. Walter Lippmann died on 14th December, 1974.

That the manufacture of consent is capable of great refinements no one, I think, denies. The process by which public opinions arise is certainly no less intricate than it has appeared in these pages and the opportunities for manipulation open to anyone who understands the process are plain enough.

The creation of consent is not a new art. It is a very old one which was supposed to have died out with the appearance of democracy. But it has not died out. It has, in fact, improved enormously in technic, because it is now based on analysis rather than on rule of thumb. And so, as a result of psychological research, coupled with the modern means of communication, the practice of democracy has turned a corner. A revolution is taking place, infinitely more significant than any shifting of economic power.

Within the life of the generation now in control of affairs, persuasion has become a self-conscious art and a regular organ of popular government. None of us begins to understand the consequences, but it is no daring prophecy to say that the knowledge of how to create consent will alter every political calculation and modify every political premise...It has been demonstrated that we cannot rely upon intuition, conscience, or the accidents of casual opinion if we are to deal with the world beyond our reach. (Public Opinion, by Walter Lippmann (Free Press, 1965; first published in 1922), page 158)

The lesson is, I think, a fairly clear one. In the absence of institutions and education by which the environment is so successfully reported that the realities of public life stand out sharply against self-centered opinion, the common interests very largely elude public opinion entirely, and can be managed only by a specialized class whose personal interests reach beyond the locality. This class is irresponsible, for it acts upon information that is not common property, in situations that the public at large does not conceive, and it can be held to account only on the accomplished fact. (Public Opinion, page 195)