Mans now holds several non-executive positions in the private sector. He describes himself as 'pursuing a portfolio career as a non-executive and independent consultant with considerable Chairman and Director level experience in directing change and modernizing business processes'.

Currently, Mans is a defence advisor for both Capita Defence Services and The Development Network and a senior advisor at ‎Dynama Solutions Ltd.[1]

A freedom of information request by Campaign Against the Arms Trade In October 2017 revealed that Capita staff held 84 passes allowing them access to the Ministry of Defence building in Whitehall. This was more than any other company, including Fujitsu (50), BAE (19) and PA Consulting (15) and Leonardo (13). [2]

Mans is also currently Deputy Lieutenant of Hampshire, and Chief Royal Engineer of the Royal Corps of Engineers. 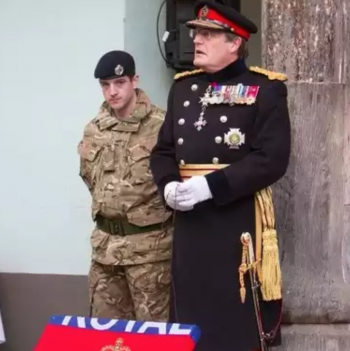 Sir Mark Mans at a Veterans in Action event

Mans was commissioned into the Corps of Royal Engineers in 1974 and saw regimental and operational service worldwide. He held a variety of high-level appointments, including Deputy Commanding General Multi-National Corps – Iraq, Military Secretary and Adjutant General.

He was a member of the Defence Infrastructure Board until 2011. [3]

In 2014 it emerged that Mans, a former member of the Defence Infrastructure Board, had landed a lucrative non-executive director appointment with Capita Defence Services just three months after retiring from the military. According to the Independent:

The company is leading one of three consortia shortlisted for the £400m contract to run the Defence Infrastructure Organisation (DIO), which manages a budget of billions, and thousands of Ministry of Defence properties.[4]

In September 2016 Spinwatch and Unlock Democracy flagged Mans' case in written evidence to the Public Administration and Constitutional Affairs Committee inquiry into ACOBA and the ongoing problem of the revolving door in British politics and the public sector. They noted that:

A number of public officials have also taken up roles which require contact with their former departments. Lieutenant-General Sir Mark Mans, Adjutant-General to the Forces from 2009-2012 applied to ACoBA for approval to take up posts with Allocate Software and Capita Defence Services. Both have contracts with the MoD and would require contact with his former department. This represents a serious conflict of interest. Although ACoBA may prevent former public officials from lobbying, the Business Appointment Rules state that ‘the lobbying ban need not prevent communications with government’. The line between communication and lobbying can be fine and the presence of contacts and the ‘friendly faces’ of former colleagues could prevent neutrality in dealings regarding contracts. As well as improving ACoBA’s definition of lobbying, we recommend extending the maximum lobbying ban period to five years, to be used in the most high-risk cases.' [5]