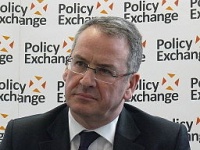 Mark Hoban was the Conservative Party member for Parliament (MP) for Fareham from 2001 to 2015. He was financial secretary to the UK HM Treasury from May 2010[1] until the cabinet reshuffle of September 2012, when he was appointed minister of state for work and pensions. He left the government in October 2013.[2]

Hoban is a chartered accountant who spent a substantial part of his career at one of the 'big four' accountancy firms PricewaterhouseCoopers. [3]

In January 2015 he announced his intention to stand down at the 2015 general election after 14 years in parliament[4] - he was replaced by Suella Fernandes who held the seat by 22,262 votes.[5]

Hoban is now chairman of reinsurance fund Flood Re, sits on the board of the London Stock Exchange and is an adviser to financial services firm Markit.

One month into the new UK Coalition government's 2010 term, Goldman Sachs International's co-CEOs Michael Sherwood and Richard Gnodde secured a meeting with Hoban according to SpinWatch.

What was discussed at this meeting, however, will never be publicly known as no agenda or formal minutes were taken, despite David Cameron's pledge that his Ministers must be “transparent about what we do and how we do it”.[6]

Hoban had dinner with lobbyists Bell Pottinger on 11 May 2011 according to hospitality records released by HM Treasury in December 2011. No information was released on who was present or what was discussed. [7]

Hoban worked for PricewaterhouseCoopers and its predecessor firms for 16 years (between 1985 and 2001).

His involvement in politics had started in 1980, when he joined the Conservative Party in the North East of England. He first stood for parliament in 1997 in South Shields.

He was appointed the Financial Secretary to the Treasury in May 2010, having done this role in opposition since December 2005. Between November 2003 and December 2005 he was Shadow Minister for Schools. Prior to November 2003, he was an Opposition Whip. He was also member of the Select Committee on Science and Technology between 2001 and 2003. [3]

Preparing for life after politics: three new jobs in 2015

The Telegraph reported that Hoban started work as the chairman of Flood Re, a reinsurance fund to protect homes at risk of flooding, in January 2015. Hoban is said to be on a sizeable salary of £150,000 in his first year which will then change to £100,000 a year thereafter. [8]

This job will be added to his current job at Markit, a financial information company, for which he is reportedly being paid £4,000 a month to work for four hours a week. [8]

Hoban accepted his third job on the board of the London Stock Exchange in February 2015. He is expected to attend four board meetings a year, plus other meetings, but the salary is unknown. [8]

According to the MPs Register of Financial Interests as at September 2010:

In my capacity as a Shadow Treasury Minister I received support from Oliver Wyman Limited in the form of services and advice provided in connection with implementation of our reforms on financial regulation. Oliver Wyman’s work has an estimated value of £150,000 for the period November 2009 to March 2010, which will be reported to the Electoral Commission by the Conservative Party.” Date of receipt: 8 March 2010 Date of acceptance: 8 March 2010 Donor status: company, registration number Y2995605 (Registered 1 April 2010)

Hoban was born and brought up in the North East of England. He attended a comprehensive school in Durham and graduated with a degree in economics from the London School of Economics. [3]

Hoban lives in Locks Heath with his wife Fiona Hoban, who he married in August 1994. She works as an assistant remembrancer for the Corporation of London, which is the local authority for London's financial centre. [3]