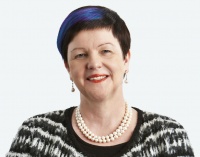 Lucy Neville-Rolfe (Baroness Neville-Rolfe) is a Conservative peer and former minister. In December 2017 she was appointed a director of outsourcing giant, Capita, and became chair of Assured Food Standards in November 2017.[1]

Neville-Rolfe was a Treasury minister from December 2016 to June 2017, and was in charge of overseeing Brexit's impact on financial services. [2]

Neville-Rolfe became a Conservative peer in the House of Lords on 10 September 2013.[4]

Neville-Rolfe is a former advisory board member of Big Four accountancy firm PricewaterhouseCoopers and of Tesco; She reportedly resigned from all paid posts when she became a minister in July 2014.[5]

After leaving the government in 1997, as the Blair government came in, Neville-Rolfe began working at Tesco. She retired in 2013 from her role as corporate and legal affairs director.[6][7]

Neville-Rolfe was part of a team which took control of Tesco's rapid growth both in the UK and globally.[6]

She has held board roles at PricewaterhouseCoopers.