From Powerbase
(Redirected from Lord Ashcroft)
Jump to: navigation, search 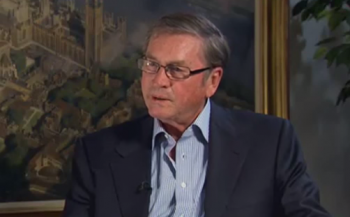 Michael Anthony Ashcroft, Baron Ashcroft, KCMG (born 4 March 1946) is a wealthy British businessman and Conservative politician and party donor who has been a member of the House of Lords since 2000. He also holds Belize nationality. In September 2012 he was appointed as the UK Prime Minister’s new “special representative for veterans’ transition”. [1]

In March 2015 Ashcroft resigned from the House of Lords to pursue his interests outside of politics. Ashcroft has chosen to concentrate his attentions on a career as a pollster and political publisher. [2]

Michael Ashcroft spent some of his early years in Belize and Malawi in connection with his father having been a colonial civil servant with placings abroad. He was educated at Anglia Polytechnic University, today Anglia Ruskin University and became a management trainee at Rothmans.

From 1977 he developed an international business services company, ADT Limited, which was sold to US conglomerate Tyco for £2.5 billion in 1997. He retains a sizeable holding in Tyco. He is now chairman of BB Holdings Limited (Alternative Investment Market) which has interests in facilities services, finance and telecommunications. It is the parent company of The Belize Bank and has a 26% share in BTL.

Michael Ashcroft has other business connections with Belize, and was appointed as the Belize government's Permanent Representative to the United Nations up to April 2000. He has made large donations to the People's United Party of Belize.

As of March 2006 he became the major shareholder in English professional football club Watford F.C., owning up to 42% of the clubs shares.[3]

He has been chancellor of Anglia Polytechnic University since November 2001, and has donated £5 million for the university's business school at Chelmsford, now called Ashcroft International Business School.

He is chairman of UK charity Crimestoppers.

He ranked 66th in the Sunday Times Rich List 2006, with an estimated personal wealth of £820m.

He is also known for his collection of Victoria Crosses, which is reputed to contain about 142, which would probably be the largest private collection of VCs ever assembled.

In 2007 his healthcare investment firm Global Health Partners "took a 33.8 per cent stake in the private mental healthcare group", the Priory.[4] The Priory specialises in the rehabilitation of addicts.

In the UK, he was a major donor to and Treasurer of the Conservative Party from 1998 to 2001, under William Hague. His tenure was marked by a number of controversies: he was seen to pay little UK income tax due to his domicile in Belize; he gained overseas donations for the Party which some thought inappropriate; and he was at the centre of a debate about openness and accountability of political funding.

Unsubstantiated speculation about his business affairs was concluded when he pursued a libel action against The Times. This was settled on 9 December, 1999, when The Times issued a statement that "[...] Litigation between the parties has been settled to mutual satisfaction, with each side bearing its own costs." [5]

In 2004 Ashcroft clashed with Conservative leader Michael Howard when he offered a £2m donation on the condition that it should go to his specified candidates, rather than into general Conservative Central Office funds.

During the "Cash for Peerages" controversy, on 31 March 2006 he was named by the Conservative Party as having loaned it £3.6m.

He is a member of The Leader's Group, an elite Conservative Party supporter group which enables donors to secure access to leading party members and the prime minister through an annual membership fee of £50,000.[6]

In March 2000, Ashcroft was appointed as a life peer with the title Baron Ashcroft, of Chichester in the County of West Sussex. His appointment to the House of Lords was controversial at the time, particularly because of his business and political interests in Belize. He was nominated by Conservative party leader William Hague on the condition that he became a UK resident. Ashcroft then announced that he intended to take the title "Baron Ashcroft of Belize", a suggestion that infuriated his political opponents. He later claimed this had been a joke, and his title was created as simply Baron Ashcroft of Chichester. [7] In June 2000 he was appointed KCMG for public service to the community and country of Belize.

Lord Ashcroft has become a significant figure in Australian politics having been identified as the single largest individual donor to any Australian political party during the Financial Year 2004/2005. The Australian Electoral Commission reported in February 2006 that Ashcroft (who gave his address as "House of Lords, Westminster, London") had donated $1,000,000 to the Liberal Party in September 2004 just before the 2004 Federal election. It was the biggest single disclosed private donation in Australian political history.

In the U.S., an intelligence research specialist for the Drug Enforcement Agency, Jonathan Randel, leaked Ashcroft's name as being in the DEA's files, although it later emerged that Ashcroft was one of 5 million people they had files on.

Randel claims to have believed the DEA was ignoring Ashcroft in its investigation of money laundering, so Ashcroft sued. A U.S. attorney investigated Randel for his leak. On January 9, 2003, Randel was sentenced to a year in a federal prison, followed by three years probation.

In June 2001, the Guardian reported that the Conservative party's multi-millionaire treasurer, Lord Ashcroft, was embroiled in new controversy over his business dealings in the offshore tax haven of Belize in central America. The report said:

US state department and drug enforcement administration (DEA) documents obtained by the Guardian disclose that the US government fears that Belize's secretive tax haven "created to provide tax shelters for companies owned by Ashcroft" is being easily exploited by money launderers and fraudsters... They warn that continued lack of controls may make Belize "an inviting target" for drug traffickers seeking to hide their profits. In one report last year, Washington noted concern over the increase "in the number of individuals found bringing large amounts of currency into the country in briefcases or concealed under clothing"... Another DEA report in 1999 records intelligence that the quantity of US cash flowing into Belize had "increased dramatically"... A previous report describes the Ashcroft-inspired offshore legislation as "a mechanism whereby illicit activities could be disguised", giving "drug traffickers freedom in establishment of companies ... to conceal or transfer drug proceeds ... money launderers never have to leave the safety of their own countries".

The report further points out:

The disclosures reignite the question of Lord Ashcroft's suitability to sit in the House of Lords, where the Tory leader William Hague promoted him. But yesterday Lord Ashcroft's spokesman, Alan Kilkenny, said money laundering in Belize did not occur on a wide scale: "Why pick on Belize?" [8]