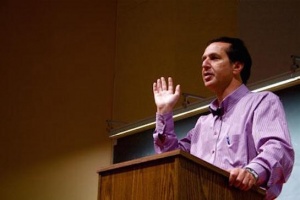 Khaled Abu Toameh is a Palestinian journalist, living in Jerusalem, who writes for the Jerusalem Post and the Jerusalem Report. Toameh appears as a commentator in Obsession, the anti-Islamic propaganda film.


Khaled Abu Toameh is an award-winning, independent Israeli-Arab journalist who has been covering Palestinian issues in the West Bank and Gaza for over two decades. He began his journalism career as a writer for an official PLO newspaper while attending Hebrew University. He now writes for the Jerusalem Post, and works frequently with NBC and TV-2 Denmark television. Mr. Toameh speaks out against the lack of free speech and press within the PA controlled areas and its effect on the foreign press' coverage on Israel, as well as the biased opinions within the foreign press' coverage. As a

veteran journalist, he has knowledge of the behind-the-scenes action within the PA and other Palestinian organizations

Toameh, the Palestinian affairs correspondent for the Jerusalem Post, delivered a lecture entitled “A Hamas Majority? An Evaluation of

the Palestinian Elections,” presented by the Chicago Friends of Israel last Wednesday.
Toameh introduced himself as an Arab Muslim who started as a consultant and translator for foreign news teams covering the Palestinian-Israeli conflict.
He described the disbelief and suspicion of other Arabs regarding his position on the conservative Jewish newspaper’s staff, but explained his peace of mind: “As a journalist I have no problem writing for a newspaper that provides a free platform,” he said.


By way of contrast, Toameh criticized the Fatah regime, which has controlled the Palestinian government for about 40 years. He recalled that one of Fatah’s first measures was the arrest of Palestinian journalists. Even today, he said, the “media remains under the control of the PLO [Palestinian Liberation Organization].”
– Nicole Burgoyne [2]

Khaled Abu Toameh is an award-winning, independent Israeli-Arab journalist who has been covering Palestinian issues in the West Bank and Gaza for over two decades. He began his journalism career as a writer for an official PLO newspaper while attending Hebrew University. He now writes for the Jerusalem Post, and works frequently with NBC

and TV-2 Denmark television. Mr. Toameh speaks out against the lack of free speech and press within the PA controlled areas and its effect on the foreign press’ coverage on Israel, as well as the biased opinions within the foreign press’ coverage. As a veteran journalist, he has knowledge of the behind- the-scenes action within the PA and other Palestinian organizations.
Khaled spoke at 13 universities including NYU, Columbia University, Depaul, NorthWestern, UCLA, Stanford and UC Santa Cruz. Five interviews were arranged with Khaled and eight articles were

written about him in campus and off campus newspapers. Over all, close to 900 students and community leaders heard Khaled speak about the overwhelming quality of freedom of speech in Israel.
– Hasbara Fellowships Newsletter, 1 March 2006

Melanie Phillips is a right-wing zionist journalist working for the London-Telegraph. This is what she states about Toameh:[3]

Khaled Abu Toameh knows all about "the Israeli occupation." He was born in the West Bank city of Tulkarem in 1963, when it was still under

Jordanian occupation. Four years later, Tulkarem, along with the rest of Judea, Samaria, the Golan Heights and the Sinai peninsula, changed hands. And much later, in 1994, Tulkarem fell under the quasi-jurisdiction of Yasser Arafat through the grace of the Oslo Accords. But Abu Toameh hasn't led a life of hopelessness and despair. He graduated from Hebrew University in 1986 with a B.A in English literature. Then, after spending some time working for a PLO "newspaper," (pasting together canned announcements sent from Tunis) he became what he calls "a real journalist." He's now the Jerusalem Post's correspondent for "the territories," and he contributes as well to NBC News, US News & World Report and The Jerusalem Report. He lives in Jerusalem with his wife and three children…

He's quick to point out, without being asked, that the Palestinians did indeed celebrate on 9-11. Why wasn't that better publicized? Threats. The PA Minister of Information announced without nuance that he "could not be responsible for the safety" of journalists in the territories if the celebrations were broadcast. Why, then, not at least report verbally on them? Abu Toameh says that it's a pattern. The journalists want to stay in the good graces of their sources, and they don't want to make waves. Criticism of Arafat's regime is prohibited absolutely, and no one wants to pay the price. In fact, the first thing Arafat did when he "returned" to the West Bank in 1994 was to clamp down on all free expression – close newspapers, fire reporters who wouldn't toe the line, take over

the media with an iron fist.

'Why is he working for a "right wing Israeli newspaper?" Abu Toameh says he's always asked. Because he's a "real journalist." In the PA, there are no real journalists, just mouthpieces for the thugocracy (my word, not his). As for the foreign press, Abu Toameh shrugs. They see no evil and hear no evil when it comes to the behavior of the PA. He describes an incredible scene back in 2002 when he was covering an event at the mukata, Arafat's compound in Ramallah. With a crowd of international reporters standing around, two Palestinian policemen brought a man out, threw him up against a wall and shot him – right under the window of Arafat's office. When the reporters converged, the policeman seemed bewildered. It was just a simple execution, nothing to get excited about, he said. And no one did. In fact, according to Abu Toameh, no one else even mentioned it. But he did… In point of fact, he says, a simple denial will usually suffice to kill any story that reflects badly on the PA.

Abu Toameh isn't gentle with many favored Palestinian myths, either. Sharon's visit to the Temple Mount did not ignite the "intifada." Rather, it was the coverage of the visit in the Palestinian media, in which it was made to appear that Sharon arrived with guns and tanks to invade and destroy the mosque and rebuild . . .. He left that sentence hanging. As for the Palestinian devotion to the "right of return" and the re-division of Jerusalem, he lays the blame squarely on the Israeli government, which by agreeing at Oslo to open those issues for resolution in "final status talks" invited that particular foot in the door. Now, he says, it's become an indelible part of the Palestinian worldview and impossible to eradicate. For the most part, they realize it's not going to happen, but you won't hear them say that. Oslo gave them the hope, the incentive to keep handing down those keys, the notion that someday…

"Bush – the savior of the Arab masses." That's a quote, and it drew an audible gasp and a few chuckles from the crowd. Not something most of us were expecting to hear. But Abu Toameh seems to believe that Bush's hard-line attitude is exactly the wake-up call the Arabs need to get their act together. He believes that the vast majority of the "Arab street" is, contrary to what we hear, strongly supportive of democracy and of America's intervention in Iraq. It's the Arab regimes (and this is nothing new) that stand to lose everything if America succeeds in Iraq and it's the regimes that must continue to promote rabid anti-American sentiments if they have any hope of survival.

Anyone who has ever been under the impression that the weapons and the training given to the PA security forces by Israel and the CIA under Oslo will be used against Palestinian militants is deluded, says Abu Toameh. "These weapons will only be used to kill Jews." That, too, is a quote, and it's the sentiment that he assures us has always permeated Arafat's regime. Since when? Since back in 1994. The sunshine days. On the threatened assassination of Arafat, Abu Toameh is again unperturbed. No big deal, he says. No one really cares about Arafat. He can't even get Mubarak, Assad and Abdullah to take his calls these days. But "the problem is no longer Arafat, it's Arafatism." Taking Arafat out could create a dangerous illusion, because his "students" are at least as much of the problem as he is. Mohammed Dahlan? Jabril Rajoub? Moderates who will promote reform? A joke.

Some of the events where Khaled Abu Toameh has spoken: [4]