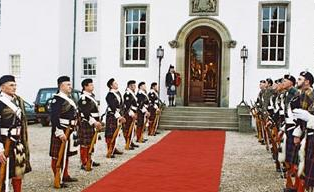 The Keepers of the Quaich is an exclusive society founded in 1988 by large international alcohol companies to promote scotch whisky. James Espey a former senior alcohol industry executive was one of the founders. [2] Membership is by invitation only, and members are sworn in at an induction ceremony held twice a year (spring and autumn) at Blair Castle in Perthshire, Scotland. It is basically an exclusive public relations and marketing strategy, the group's purpose is to promote Scotch Whisky after declining sales throughout the 1980s, in domestic and global markets. The ceremonies are intended to reward individuals who have made a valuable contribution to promoting scotch whisky. According to one of the members the group's mission statement is:

To advance the standing and prosperity of one of Britain’s premier export industries, and to make more widely known its uniqueness, traditions, quality, service and benefits to the community it serves at home and in the markets of the world.[3]

Members must be invited to join by those already within the society. To be selected, individuals must have at least five years experience within the Scotch Whisky industry and have made a "notable contribution" to the promotion of Scotch.[4] There are reportedly 1800 members in over 82 countries worldwide. [5] Those who are known to have attended as special guests or guest speakers include Ronald Reagan and his wife Nancy, Prince Charles, Caspar Weinberger and South Africa's former President Frederik Willem De Klerk. [6] 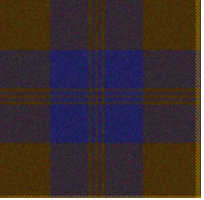 The Keepers of the Quaich have their own Tartan [7]

In 2008 Scotland's First Minister Alex Salmond became a 'keeper' and rewarded the whisky industry with this endorsement: "Whisky is vital to the Scottish Government's number one priority - increasing sustainable economic growth. My Government fully backs the Scottish Whisky Association's push for greater legal protection in order to protect this iconic Scottish product in the global market." [8]

The Liberal Democrat Viscount, John Thurso, one of twelve patrons of the group, told Whisky Magazine “We are all dedicated to whisky, to its purity and variety not only as a commodity but also as Scotland’s greatest export,” he orates. “We are like a constitutional aristocracy. We have no power but considerable influence. It is a great honour to be a Keeper of the Quaich but particularly to be a Patron.” [9]

Tom Bruce Gardyne writing in Whisky Magazine provides some insight into the gatherings in terms of the powerful guests present and the masonic style rituals used. However, it should be noted that although present at the dinner Gardyne was not witness to the initiation ceremony of new members. When Gardyne attended the master of the ceremony was Jim McColl, of Beechgrove Garden fame, this role involves addressing the haggis, and the special guest was Philip Lader, Bill Clinton's former ambassador to Britain. On Gardyne's visit Lader was sworn in by laying hands on the ceremonial Quaich together with the 31 Life Members and eight Masters also being inducted at the time. Gardyne shares a tale from a previous banquet:

The story goes that the Fear an Tigh that evening was having quite a tussle with a particularly slippery haggis which jumped the knife and had to be snatched from the floor. "What's he doing?" whispered Nancy Reagan, wife of the guest of honour – the former President of the United States Ronald Reagan, to her neighbour on the top-table. "Addressing the haggis," replied Lord Elgin, the Society Patron and past Grand Master. "What for?" came her reply. "So we can eat it," replied Lord Elgin (Andrew Bruce) politely. This was met by a horrified cry of: "EAT IT? I'm not eating it!"[10].

Other noteworthy attendees present with Gardyne included the Reverend John Cairns who delivered a robust and humourous poem he had penned about the virtues of Scotch. John McGrath, Chairman of Diageo in Scotland, proposed the Loyal toast. He spoke of whisky's struggle against regulation, governments and taxation and how the struggle had united the defenders of the spirit. Perhaps the most interesting observation made by the author was about the purpose and role of this group:

Many claim the big decisions affecting Scotch whisky are too often made outside Scotland, but watching the big guns on the top table one wondered what deals were being struck right here in the heart of Perthshire. The industry is currently in a state of jittery anticipation over the fate of its third biggest player – Seagrams. [11]. 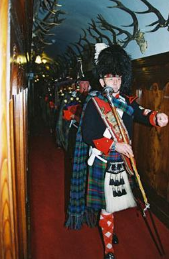 New recruits are led by pipers to the ceremony room [12]

There are two levels of members, the first being Keeper of the Quaich. There are around 1800 members at this level, all with the required five years of service positively promoting scotch whisky. You have to be nominated by one of the leading companies. The second level is the Masters of the Quaich, who are selected from the Keepers by an executive committee that judges contenders on factors such as their brand reputations and market success. There are around 104 Masters and this is seen as a great honour. [13] One newly appointed Master told the Oakville Beaver:

When you are part of this group, you can call on fellow Keepers and Master Keepers and discuss business and Scotch whisky," he said. "To me, it is a whole library of people that you can call upon, if you need certain advice and support." [14]

The Master of ceremonies performs the initiations and heads the celebrations, this prestigious role that changes with each ceremony. This List was compiled in 1996 and therefore, may not remain accurate:

Master of Ceremonies (FEAR AN TIGH)

There is no list detailing the membership of this exclusive club, the following list has been compiled from a variety of sources.

The group has informal links with