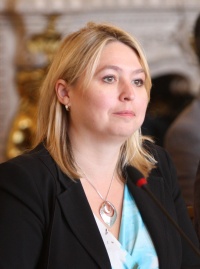 Karen Bradley has been the Conservative Party MP for Staffordshire Moorlands since 2010. In the 2015 election she retained her seat with a majority of 10,174. [1]

She was appointed as Secretary of State for Culture by Prime Minister Theresa May on 14 July 2016. [2]

Previously, Bradley was appointed an assistant whip to the HM Treasury in 2012.[3] In October 2013, Bradley was promoted to whip (Lord Commissioner).[4] She is currently the parliamentary under secretary of state at the Home Office.

Bradley contested Manchester Withington at the 2005 general election, where she came third. She was selected for Staffordshire Moorlands in July 2006 and was returned to Parliament at the General Election in 2010. She was also a member of the select committee on work and pensions and of the procedure committee. [5]

Bradley is a chartered accountant and chartered tax advisor and worked in public practice from 1991 to 2004, first for Deloitte & Touche and then for KPMG. In 2004, she became a self-employed fiscal and economic consultant. Bradley rejoined KPMG in 2007, where she remained until shortly before her election to the House of Commons. [5]