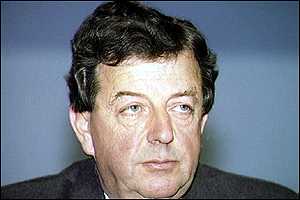 John Wakeham began his political career with the Conservative Party in 1974 and was appointed a life peer in 1992 by John Major. During his time in politics he has held various high profile positions, Lord Privy Seal and leader of the House of Commons in 1987-88 and 988-89,, lord president of the council and secretary of state for energy in 1989-92.

Wakeham has been described as 'a man so well connected that he probably networks in his dreams'. [1]. He was appointed by Tony Blair to head a Royal Commission on the reform of the House of Lords, his final report was criticised for not going far enough, especially his recommendation that less than a quarter of the House should be elected. [2].

Wakeham was Thatcher's chief whip in the 1980s, and as leader of the House in the late 1980s he was involved in the pilot scheme to televise the Houses of Parliament. As energy secretary he oversaw the task of the privatisation of electricity. It was in this capacity that Wakeham formed a relationship with Enron a firm at front of the largest private electricity market- the USA. In 1994, months after Lord Wakeham quit as leader of the House of Lords and two years after leaving the energy brief, he became a non-executive director of Enron [4]. According to The Guardian in 2002:

Lord Wakeham cast his net wider in his search for lucrative roles. In January 1995, his business career caused angry protests in the Commons when MPs discovered that he had become a director of the merchant bank NM Rothschild. NM Rothschild had advised regional electricity companies while Lord Wakeham was privatising them as a member of the government. The merchant bank had already signed up (Lord) Nigel Lawson, former chancellor, as a non-executive director. Gordon Brown, then shadow chancellor, wrote to the parliamentary standards commissioner, Lord Nolan, complaining: "The cabinet room is becoming a recruiting ground for the boards of privatised companies." It later emerged that Lord Wakeham had awarded a contract to NM Rothschild to advise the government on coal privatisation. More recently, NM Rothschild has taken the former minister into equally controversial waters. The bank advised the government on privatisation of Railtrack, and now faces lawsuits from shareholders, who claim the prospectus for flotation was misleading. Lord Wakeham also sits on the advisory board of LEK Consulting, a management consultancy which is working with the German bank WestLB on Swiftrail, a project to buy Railtrack out of administration...Among his responsibilities is chairing the board of Vosper Thorneycroft, the shipbuilder. This appointment followed a familiar pattern - one of his first government jobs in the early 1980s was as a parliamentary under-secretary of state at the Department of Trade, then responsible for shipbuilding [5].

Wakeham was instrumental in setting up The Portman Group an alcohol industry funded group who strive to make their business appear socially acceptable and work with the government to do this [6].

Wakeham's interests listed by the House of Lords include: