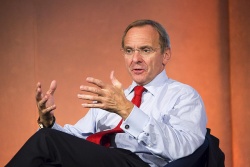 John Manzoni is chief executive of the UK civil service and permanent secretary of the Cabinet Office[1] and a non-executive director at drinks company SABMiller.

He is a former oil man, who was group managing director of BP until 2007 and then president and chief executive of Talisman Energy until 2014.

Manzoni joined BP in 1983, holding many senior roles including group managing director. During his time at BP, Lord Browne, the UK government’s now former lead non-executive director, was chief executive. In 2005, whilst Manzoni was in charge of BP, an explosion occurred in the Texas City oil refinery, killing 15 people and injuring at least 170 others.[2] An internal report accused Manzoni of failing to perform his duties in the run-up to the explosion.[3]

In 2007 he left BP, to join Talisman Energy as president and chief executive.[4]

Controversy over directorships held after joining the civil service

In February 2014 he was appointed chief executive of the UK's Major Projects Authority.[5]

Controversy resulted from the government's decision to allow Manzoni to retain his roles on the board of SABMiller, as chairman of Leyshon Energy and as an adviser to Adamant Ventures.[6]

In October 2014 Manzoni was appointed Britain's first chief executive of the civil service; in this role he will oversee administrative and commercial performance of government departments. He relinquished his roles at Leyshon Energy and Adamant Ventures but the Cabinet Office allowed him to continue as a non-executive director at SABMiller. This decision received much criticism, partly due to SABMiller's influential role in stopping the plans for minimum unit pricing for alcohol. Labour MP John Mann, Green MP Caroline Lucas and Conservative MP Sarah Wollaston all spoke out about the conflict of interest posed by the two positions. Further suspicion arose because the six-member panel that appointed Manzoni included his former boss Lord Browne.[6][7]

Following an open letter by leading public health professionals to Sir Jeremy Heywood, head of the home civil service and the Cabinet secretary, questioning Manzoni's conflict of interests and reminding him of the Nolan Principles, it was announced Manzoni will resign from his role at SABMiller in 2015. Before this announcement, the Cabinet Office revealed Manzoni would continue his role on an unpaid basis but that has now been taken one step further.[8][9]