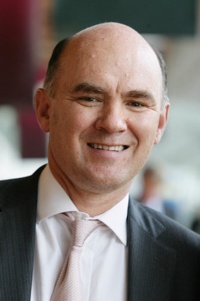 Ian Taylor is President and Chief Executive of Vitol a conglomerate of oil and energy companies which he has served for 20 years[1]. Taylor is also reported as a donor to Tory leader David Cameron and Tory Business Secretary Alan Duncan.

In 2008, Taylor is reported to have donated more that £50,000 to David Cameron, which automatically includes him as a member of Cameron's The Leader's Group where he has the opportunity to meet the Tory leader in person through meetings and events[2].

Taylor was also reported (in 2008) as a donor to Alan Duncan, the Tory Shadow Secretary of State for Business, Enterprise and Regulatory Reform[3]. Taylor and Duncan have a long history together since they were colleagues at Shell and remain close friends. It is claimed that millionaire Duncan 'made part of his fortune by brokering a deal between Vitol and Pakistan during the Gulf war'. Duncan's company, Harcourt Consultants, continued to do work for Vitol in Pakistan until around 1997.[4]. Donations to Cabinet members from companies that have direct interests in their policy portfolios has been criticised as concealing a conflict of interest, a claim the Tories have regarded as "utter nonsense".[5].

With effect of April 2008, Duncan is also on the Board of Arawak Energy Ltd[6]which is a 41% owned subsidiary of Vitol (of which Taylor is President & CEO). In December 2008, Vitol announced its offer to buy Arawak in its entirety through Vitol subsidiary Rosco[7]. So Duncan, who is Shadow Business Secretary with influence on business policy, benefits financially from Vitol on 2 levels: through personal donations from the company's President & CEO (who also happens to be a close friend) and also through renumeration for his involvement on the Board of its subsidiary. It's hard to imagine how this scenario can present anything but a conflict of interests!

Dinner at Downing Street and Chequers with the Camerons

Taylor is recorded on the Register of Major Donors attending meals held at Official Residences as dining with David Cameron on 22 November 2013. [8]

Taylor donated £150,000 to The In Campaign to help promote Britain's continued membership of the European Union in the referendum on 23 June 2016. [9]

He also gave a smaller amount of £10,000 on 7 April 2016 to the Conservatives IN campaign, the campaign designed by David Cameron to close the fissures opened in the Tory party by the European Union referendum. [10]