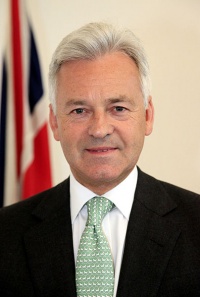 Alan Duncan is a UK Conservative Party MP and a former Minister of State for Europe and the Americas at the Foreign and Commonwealth Office. He was previously a minister of state at the Department for International Development from 2010.[1] He left the Cabinet in July 2014 following the reshuffle.[2]

Having left his post as a minister at the Department of International Development, Duncan requested the advice of ACOBA about becoming a Non-Executive Director for Fujairah Refining Ltd. The committee permitted Duncan to take up the placement on the conditions that he does not draw on any privileged information from his time in government, that he make clear in any activities he undertakes that he is a representative for Fujairah and not the British government, and that he serve a 2 year ban on lobbying from his last day in office. He took up the role in February 2016. [4]

Duncan questioned the conduct of Labour MP and chair of the public accounts committee (PAC), Margaret Hodge in her interviews with the members of the board of HSBC over the 2015 tax avoidance scandal. He accused her of being 'abusive and bullying' towards senior HSBC executives when they appeared before her panel and called upon her to apologise for demanding Rona Fairhead quit or be sacked as chair of the BBC Trust for her role in the scandal.

He also claimed Hodge made 'undoubtedly libellous assertions' about the tax affairs of the bank’s chief executive Stuart Gulliver.[5]