HN30 is the cipher given to a former officer with the Special Demonstration Squad, serving as cover officer / desk officer from 2004 to the closure of the unit in 2008.[1] The Chair of the Undercover Policing Inquiry, Sir John Mitting, has ruled that her name will be restricted for the purposes of the Inquiry[2] (for details of the N cipher system see N officers).

According to her 'impact statement' they joined the police in the early 1980s, and Special Branch a few years later, where she held a variety of rules. This included one operation which the 'officer believes gives rise to a risk of significant harm'. She also stated:[3]

My role within the SDS was a back office role, predominantly as a cover officer, in the last years of the SDS. I was never deployed as an undercover officer.
I understood that all my service in Special Branch was confidential I have always maintained confidentiality after my career and have told nobody (other than my husband) any of the details of my time in Special Branch or the details of the work I did.

According to her risk assessment:[1]

She initially declined for personal reasons.N30 informed the risk assessor that N36 had old her that she had been recommended. N30 believes the recommendation was either from N10 [ Bob Lambert ] or N90 [Mark Kerry (alias), infiltrated Socialist Workers Party / London Anti-Apartheid Group]. This convinced N30 to join the SDS as a desk/cover officer.
N30 had already completed an approved agent handling course and believed this would assist her in this new role. There was no psychometric training. N30 moved into the back office in a support role. This comprised administrative duties, general support and cover officer roles. 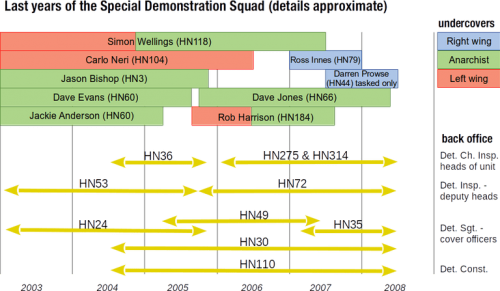 Structure of SDS in its last years

Bishop and Evans were arrested in Scotland during the G8 Summit protests of 2005 (see under Jason Bishop. Of this, the risk assessment states:[1]

N30's recollection was that she had to return to London and N36 and N53 dealt with this matter.

the implication being that she was in Scotland during the lead up to the G8.

Although she was a supervisor and had been a cover officer for N18, N72 was the operational DI and took responsibility for the matter. N30 stated that in her opinion senior management used the perceived mismanagement of this arrest to close the unit.

At one point the risk assessment notes:[1]

the closure of the unit in 2008 by N314 and N275 was, in the opinion of N30, unfair and the cause of some friction with the remainder of the management team.

This is repeated later in the assessment:

She commented: its so unfair. This is blame culture that began with the closure of the unit by N314 and N275. They could have closed the unit much earlier and more fairly. They used N72 as a fall guy. It was really unfair. When I talk and think about it, it really upsets me.
When commenting on the SDS, N72 stated 'N314 and N275 undermined field officers. They had it in for N110 and they tried to get rid of another backroom staff, N30'.

This needs to be compared to a 2014 report in the Guardian which stated:[4]

The Scotland Yard undercover unit that gathered intelligence on 18 grieving families was known by police chiefs six years ago to have been so out of control it had "lost [its] moral compass" and become a "force within a force".

Further points noted by the risk assessment are:[1]

HN30 was a cover officer in the last years of existence of the Special Demonstration Squad. Performance of her duties as such did not and does not expose her to any risk of harm. For reasons particular to some of the undercover officers for whom she provided cover, a significant part of her evidence will have to be given in closed session, in any event. But for the matter referred to below, there would have been no reason why she should not give public evidence about the remainder of her duties in her own name.
During her police career, she participated in an operation which did give rise to a risk to her safety. To an extent that cannot be quantified now, that risk, although small, remains. It is not necessary to run it, to permit the Inquiry to fulfil its terms of reference. She will give evidence about performance of her Special Demonstration Squad duties, except that which has to be given in closed session, in public under her cypher. Nothing of value will be lost by her doing so. In those circumstances, the interference in her right to respect for an aspect of her private life -her physical integrity -which would be caused by publication of her real name would not be justified under Article8(2) of the European Convention.

A closed note also accompanied the above.

Given this is not an [undercover officer], any cover name will be considered at the document redaction stage.

However, no matter how small the risk is, it is a risk to my physical safety. I will have to take steps to increase my security awareness at a time when I am now retired and having thought I had moved on from that. [Gist of particular concern]. I thought I had moved on from this.
It is also therefore the impact on our day-to-day lives that concerns me. The non-restriction of my name and its association with SDS shines a light onto it and gives it much greater prominence than it had [since the operation].