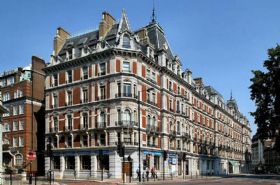 Grosvenor Gardens, not far from Victoria tube, London is home to a large concentration of Climate Change, Energy and Carbon (trading and offsetting particularly) related organisations, lobby groups and businesses. Some of these share boardroom connections and have swapped chairs and other staff over the years. Others share offices and addresses. A number of parliament-related organisations are also housed here, giving lobby groups close geographic access to powerful political figures.

See The Carbon-Markets Lobby - One big happy family for an analysis of Grosvenor House connections.

Further down the street:

A 2009 Ends report by consultancy firm Innovas revealed the UK to have the sixth largest 'low carbon and environmental goods and services' (LCEGS) sector (following the US, China, Japan, India and Germany). The sector includes alternative power generation and greener transport fuels, building technologies, carbon finance, and carbon capture and storage (CCS) which generated £106.5 billion in 2007/08 and is predicted to be growing to £154.8 billion by 2014 (45% growth). The lion's share will take place in the renewable energy sector, with wind having the highest predicted growth. [1] [2]

'Opposition to carbon trading has grown due to the belief that such approaches do little to help climate change and instead provide substantial profits for corporate greenhouse gas polluters. Critics point out failures in accounting, dubious science, and the negative impact of the carbon market on local communities. In addition, critics contend that carbon trading does not solve the overall pollution problem since net reduction would require fewer allowances rather than permitting groups that pollute less to sell their allowances to the highest bidder.'

'Carbon Trade Watch has argued that carbon trading places disproportionate emphasis on individual lifestyles and carbon footprints, rather than addressing the larger, systematic changes and collective political action required to successfully address pollution and climate change. According to Carbon Trade Watch's Kevin Smith, "Effective action on climate change involves demanding, adopting and supporting policies that reduce emissions at the source as opposed to offsetting or trading. Carbon trading isn't an effective response; emissions have to be reduced across the board without elaborate get-out clauses for the biggest polluters."' [3]