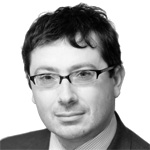 Anthony Hobley is a leading banking lawyer (Norton Rose) who specialises in climate change and emissions trading law based in London. He is a key figure in British carbon trading business, with high powered connections to Department of Climate Change and the UK Business Council for Sustainable Energy. He is also chairman of the London Climate Change Services which promotes business opportunities through carbon markets, a board member of Carbon Markets and Investors Association.[1]

'Under invitation of the European Commission he was asked to speak in New Delhi on the 'investment in CDM in India and in Budapest at the British Embassy where he chaired the session jointly with Prince Andrew; in Tokyo by the Japanese power industry on both the UK and EU ETSs; in Ottawa at the annual meeting of the International Emissions Trading Association (IETA) and many other events. He has also appeared on UK television and radio speaking on climate change and has been quoted in the Economist, The Financial Times and the Wall Street Journal.' [2]

'Anthony has been described as a leader in his field in four recent editions of the Chambers Guide to the Legal Profession in the UK'.[3]