Air Chief Marshal Sir Glenn Torpy was the Chief of the British Air Staff from 2006 until his retirement from the military in 2009.

Sir Glenn was named among a group of top military officials hosted by BAE Systems on 52 private dining and social occasions, across a three-year-period to 2010.[1]

After retiring, Torpy took up a new role as a senior military adviser to BAE Systems in January 2011.[2] Torpy also became Chairman of

A 2001 Ministry of Defence biography gave the following details of Torpy's career: 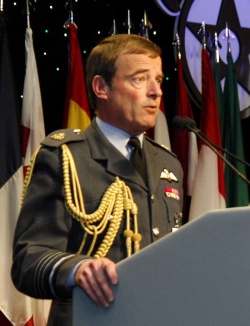 Air Vice-Marshal Glenn Torpy joined the Royal Air Force in 1974 after studying aeronautical engineering at Imperial College, London. He has completed two tours as a Jaguar reconnaissance pilot, a tour as a Qualified Weapons Instructor on the Hawk, and commanded a Tornado GR1A tactical reconnaissance squadron. He saw active service with 13 Squadron during the Gulf War, for which he was awarded the Distinguished Service Order. Graduating from the RAF Staff College in 1987, he served in a staff appointment at MOD before acting as Personal Staff Officer to the AOCinC Strike Command. He commanded RAF Bruggen in Germany, graduated from the Royal College of Defence Studies, and attended the Higher Command & Staff Course. A posting at the Permanent Joint Head Quarters, Northwood, as Assistant Chief of Staff for Operations included Operation Desert Fox in December 1998. He spent a short time as Director Air Operations at MOD before promotion to Assistant Chief of the Defence Staff (Operations). He became Air Officer Commanding 1 Group in March 2001.[4]

Torpy gave evidence under a public hearing to the Iraq Inquiry on 18 January 2011.

Torpy is an advisory member of the EastWest Institute.