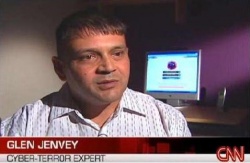 Glen A G Jenvey (born June 1965 in Salisbury), is a freelance 'terrorism expert' and agent provocateur who has claimed to be working with several "intelligence services". He calls himself a "Free-lance Terror Investigator" and has used the pseudonym Pervez Khan. [1] He has appeared frequently in the mainstream media (e.g., BBC, CNN, FoxNews...) as an expert on 'radical Islam'. [2] Jenvey boasts that he infiltrated various "radical" groups including the Liberation Tigers of Tamil Eelam and Hizb ut Tahrir. He is a member of the far-right British Freedom Party.[3]

It has been claimed that Jenvey acted as a spy for the Americans in Iran. From the account given by Jenvey to the News of the World journalist Lewis Panther however, this claim is hyperbolic at best. 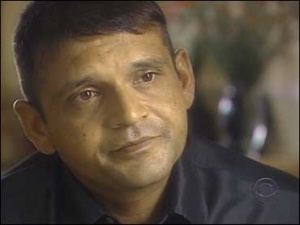 Jenvey says he went travelling in the 1990s and before going to Iran claims to have contacted the military attache at the American Embassy in London. He says they "only spoke over the phone," but that, "it was clear they wanted information from inside the country. It was all very casual, but I could tell they were keen to get on-the-ground information." Jenvey commented that his father “had been in the military, and I suppose that’s what I wanted to do." [4]

On Friday 21 November 1997 Jenvey was involved in 'an alleged road- rage incident after an angry altercation with another driver'. Jenvey was described as 'aged 32, unemployed, of Whiteparish, near Salisbury' and as having to 'report back to police on December 16 after he was reported on suspicion of assault'.[5]

When the case came to court a year later Jenvey was described as an unemployed actor:

Glen Jenvey hit Gloucestershire's top civilian police officer John Ellis in a road rage attack, a court heard. The 33-year-old admitted he struck Mr Ellis after their cars had a minor shunt in Salisbury, Wiltshire, last November. Unemployed actor Jenvey originally denied committing common assault but he changed his plea to guilty before his trial was due to start yesterday. Salisbury magistrates gave Jenvey a two-year conditional discharge and ordered him to pay Mr Ellis GBP 150 compensation and GBP 45 costs... Mr Guy Knell, prosecuting, told magistrates an argument broke out between Jenvey, of Whiteparish, near Salisbury, and Mr Ellis when their cars collided.He said Mr Ellis' Mazda 323 was shunted from behind by Jenvey's Ford Sierra Sapphire.[6]

Undercover inside the LTTE

During the period where Jenvey was described as 'unemployed' and an 'unemployed actor' (November 1997 and August 1998) and was living in Whiteparish near Salisbury in Wiltshire, he was allegedly working as a press officer for the 'political wing' of the Liberation Tigers of Tamil Eelam. At the time the International secretariat of LTTE was at 211 Katherine Road, London E6 IBU.[7] According to Google maps this address is 129 miles from Whiteparish.[8]

Jenvey's Vigil colleague Dominic Whiteman alleges - in a piece posted on the website of the Sri Lankan government's Ministry of Defence - that:

Go back to the 10th April, 1998. VIGIL intelligence operative Glen Jenvey was sitting in his chair at the LTTE's London headquarters at 211 Katherine Road. Jenvey had by then infiltrated the LTTE so successfully - working at the time for an SIS (State Intelligence Service) official - that, extraordinarily, he was working as the LTTE's official press secretary, appointed by the terrorist group's London leaders. [9] 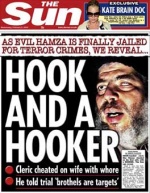 Jenvey is claimed to have played a part in the arrest and conviction of the Muslim cleric and tabloid hate figure Abu Hamza. In a long article on the website Global Politician by the News of the World journalist Lewis Panther, Jenvey says: “it had become an obsession bringing Hamza down and I jacked in my job as a van driver to spend all hours posing as a fanatical Muslim.” “It wasn’t the hardest thing to do,” he said, “as I’d had the experience of getting inside a group to spy on them when I worked as the Tamil Tigers press officer to spy on them for the Sri Lankan military.” [10]

Jenvey set up a website so as to appear to be dedicated to the creation of an Islamic state in Britain. The website was called Islamic News and according to the Internet Archive, went active on 24 May 2002. Jenvey used the alias 'Pervez Khan', referring to himself as Editor-in-Chief of the site. Some time around October 2002, Jenvey came into contact with fellow 'terrorism expert' Neil Doyle [11] who wrote articles giving some flattering exposure to Jenvey in the press.

There is no suggestion in any of the accounts that Jenvey ever actually met Hamza. Rather it suggests that having set up Islamic News, Jenvey requested that Hamza sent him recordings of his speeches. [12]

Jenvey says on 6 June 2003 he then made a statement Scotland Yard’s anti-terrorist branch who said they would pass on the information to the FBI. According to the article one of the films which Jenvey passed on to johnathangaltfilms.com was used in evidence against an associate of Hamza called James Ujaama. [13]

By September 2002 Islamic News no longer posted links to militant muslim websites, and instead posted a message reading: "We've changed our mind about this whole terrorism thing. Jehad is Crap!" [14] The message on the homepage was signed with the name Johnathan Galt and ended thus:

By 2006 Jenvey had teamed up with another anti-Muslim activist, a businessman called Dominic Whiteman. Unlike Jenvey Whiteman was well connected with friends in the City and in politics. Jenvey became a member of an organisation they referred to as VIGIL. On 14 November 2006 the BBC ran stories on File on 4 and Newsnight based heavily on VIGIL's research. Newsnight reporter Richard Watson referred to "radicalisation over the internet, on university campuses and in criminal gangs" and "alarming evidence which reveals how a minority of young British Muslims are being drawn into a life of extremism and crime." [16] Glen Jenvey warned the programme that Omar Bakri Mohammad, who had recently been barred from the UK, was "back in the cyber sense" through broadcasts on the internet. Another of Jenvey's supposed exposés was an advert he found calling for a protest at the Old Bailey. The defendant in the case was Mizanur Rahman, a 23 year old man who was later convicted for incitement to racial hatred for comments made during a protest at the UK's Danish Embassy over cartoons depicting the Prophet Muhammad. [17] "Sure enough," Richard Watson commented, "the next day the radicals turned up and there was a violence struggle with the police outside the court."

Fabricated threats and the targeting of Alan Sugar 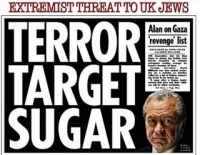 On 1 January 2009 The Sun and The Express printed claims by Jenvey that individuals had posted threats of a September 11th style terrorist attack in the United States on an Islamist website. Jenvey referred to a posting which commenting that an "new overwhelming attack is going to occur very soon". [18] The version of the story appearing in the Scottish issue of The Sun referred to Jenvey as a 'top Government counter-terrorism expert' and identified the website in question as the forum website Al-Firdaws, [19] which appears to be focused on Islamic jurisprudence. The story as it appeared in The Express also referred to Jenvey as a 'top Government counter-terrorism expert', and added that 'Jenvey's warning was backed by Tory MP Patrick Mercer, the chairman of the House of Commons Counter-Terrorism Sub-committee.' [20]

A week later The Sun printed new claims by Jenvey, this time based on postings on the online forum Ummah.com. The claims formed the basis of a front page story declaring that the well known British entrepreneur was a target for terrorists. On page 9 The Sun followed up the story with another article entitled 'HATE HIT LIST'. [21] Only below that article did The Sun also mention that the day before Israel had bombed a UN school in Gaza. [22] The Sun stated that:

The Sun referred to postings by two used on Ummah.com. One by a user Saladin1970 who asked for 'a list of those who support Israel', and another by a second user called Abuislam who asked: 'Can someone start posting names and addresses?'. Saladin1970 then gives a link to the Power 100 list of top British Jews. [24] The Sun quoted Jenvey as saying: "The Ummah website has been used by extremists. Those listed should treat it very seriously. Expect a hate campaign and intimidation by 20 or 30 thugs." [25]

Ummah.com responded to the story that day with a press release pointing out that what The Sun had failed to mention was that Saladin1970, who initiated the 'thread' in fact requested the contact details "so that we can write polite letters reminding them of the injustices of Israel and to stop supporting Israel." [26] It also pointed to the original threat which contained no named individuals, suggesting that the particular names in the story were simply the most news worthy individuals lifted from the list of 100 British Jews referred to in the thread.

Further discussion on Ummah.com revealed that the second user referred to in The Sun's story 'Abuislam', was purportedly an individual called Richard Tims. Another account 'r.tims' with the same IP and email addresses as 'abuislam' had made only one post, which promoted a website called sellyourstory.org.

The incident has led to an investigation by The Press Complaints Commission. [34]

Jenvey was arrested as a result of the episode in December 2009.[35]

Today, the British police want to question and/or arrest the British blogger known as Lionheart. His crime? Turning his life around as a young school dropout and petty drug dealer and emerging as a believing Christian who opposes the drug plague in his hometown of Luton and who views the Pakistani Islamist and al-Qaeda control of the drug trade in Luton as both criminally and politically dangerous. For this, Lionheart has been charged with “stirring up racial hatred”—which is a crime in the UK.

Yes, Luton—where the 7/7 suicide bombers, Omar Bakri, and the hook-handed Abu Hamza of the Finsbury Park Mosque all came from. In fact, according to Lionheart, one of his supporters is Glen Jenvey, the man who helped imprison Abu Hamza and aided in the expulsion of Omar Bakri from Great Britain.[36]

This comment is from the blog of Phyllis Chesler, a zionist feminist activist who compares those in favour of a boycott of Israel to Hitler[37]

At 2:00 in the morning of 16 January 2009 'Lionheart' appeared on an American online radio show called 'No Compromise'. Jenvey had also been scheduled to appear but according to the host had was "on hiding for his life as we speak" following the fabricated story in The Sun described above. [38] In the interview 'Lionheart' described British Pakistanis as 'Pakis' and claimed that the drug problem in his home town of Luton was the result of a deliberate Muslim plot to undermine his community. He told the host that "The Qur’an is a death manual, its a cult, Islam is a death cult. They are a religious, political military force that's seeking to take our country over." He said that he set up his blog after visiting Israel: "I had a couple of trips to Israel and a few things happened there, and I crossed paths with someone, a Jewish computer expert, and he helped me set the blog up and I've just been writing it ever since really." [39] 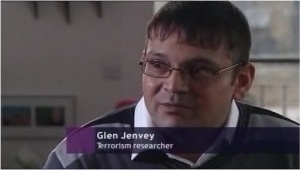 Membership of the British Freedom Party

Jenvey is a member of the far-right British Freedom Party.[40]

Website: www.glen-jenvey.com - This website (as of July 2008) now not online and not archived at the Internet Archive.
Email: glenjenvey@aol.com