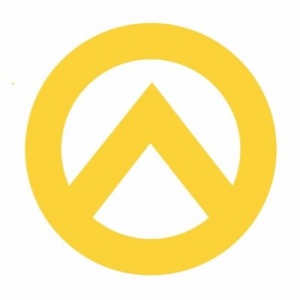 The group's logo, retrieved from their Twitter page in 2016/17

Génération Identitaire is a small French anti-Islam and right-wing extremist group. It was founded in September 2012. It launched with a video that the group declared was 'not a manifesto, but a declaration of war'. [1]

The group emanates from the European-wide Identitarian Bloc (or Bloc Identitaire) founded in 2003 by the ex-leader of Unité Radicale (UR) - Fabrice Robert. UR had been dissolved a year earlier, as Maxime Brunerie, who was close to the movement, had attempted to murder the president Jacques Chirac. [2]

Generation Identitaire claims to have 2,000 members. It has organised “self-defence” training in several French towns, as well as a national training school.

Generation Identitaire is also part of the far-right Defend Europe network of young anti-immigrant and anti-Islam activists. In August 2017 the network chartered a boat in the Mediterranean to try to hinder the rescue of refugees ( 'to send them “back to Africa”') by harassing and blocking search and rescue vessels run by non-profit organisations and charities including Save the Children. The operation was shortlived, lasting only a week after a series of embarrassing setbacks and opposition by authorities in Sicily, Greece and Tunisia. Despite failing to achieve its objectives, the group, which had crowdfunded £67,000, applauded their mission as a success. [3]

They believe France is being attacked by a government that wishes to impose a uniformity of culture by not curbing immigration, by teaching history classes that prevent people from loving their country, and by advocating for a failing 'multi-culturalism'. The group's statement also claims to be fighting against the "racaille", or 'riffraff' [5] and that France is in danger of 'Islamification'. [6] Their website, states: 'We do not want more immigration from outside Europe or new mosque construction on French soil.' 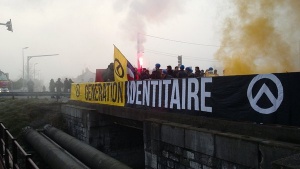 Members of GI blocking a bridge to Calais from refugees, 11 March 2016. Retrieved 14 September 2016 from a member, Matthieu Bontant's, Twitter profile

The group focuses on direct and confrontational actions. Such actions and GI's militaristic outlook strongly resemble that of UK anti-Muslim and far-right group Britain First.

The far-right group planned to open a bar to act as its headquarters in the northern city of Lille on 24 September 2016. Located just 200 metres from the Grand Palais, it will contain a boxing gym, a cinema, a level advice centre, and a library. Aurélien Verhassel, the group’s local leader, said it would open only to 'Europeans of French spirit, heirs to the Helleno-Christian civilisation'. Locals launched a petition to block the bar, called La Citadelle, citing concern that it 'will propagate hate and cause incidents that are beyond control'.[18]

The petition had gathered more than 60,000 signatures by the 24th, but the Citadelle’s inauguration went ahead as planned with 30 members of the group present. Around 500 protesters, many of them supporters of the far-Left, marched behind banners with slogans such as 'No fascists in our districts' in an attempt to stop the bar's official opening on the evening of the 24th. [19]

In November 2016, demonstrations against the bar were still taking place. On the 19th, protestors had gathered between 600 and 1,200 people in the streets and 70,000 signatures against the bar on their online petition. [20]