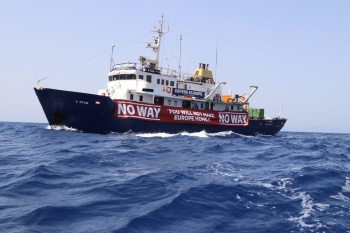 Defend Europe is a far-right network of young anti-immigrant and anti-Islam activists which aims to send refugees “back to Africa by blocking their boats.

Right now so-called “humanitarian” NGOs smuggled hundred thousands of illegal migrants to Europe and endangered the security and future of our continent. They are the ones who are responsible for the mass drowning of thousands of Africans in the Mediterranean. But we are no longer looking away. We do something against it.

This needs to stop. These criminal NGOs are collecting donations to rent ships and to pick up the illegal migrants in front of the Libyan coast. In order to achieve their goal they don’t even shy away from working together with human smugglers. They are nothing less then a part of the international human traffick ring and the migrant business. Therefore it is time to stop these criminals. The first step is already done! [1]

In August 2017 the network chartered a boat in the Mediterranean to try to hinder the rescue of refugees by non-profit organisations and charities including Save the Children. Its operation was shortlived, however, lasting only a week after a series of embarrassing setbacks and opposition by authorities in Sicily, Greece and Tunisia. Despite failing to achieve its objectives, the group, which had crowdfunded £67,000, applauded their mission as a success. [2]

In France, the group behind Defend Europe is Generation Identitaire, whose actions since 2014 have resembled those of anti-Muslim group Britain First.

Defend Europe has not posted on Twitter since the end of November 2017. The Generation Identitaire twitter account, was taken down by Twitter in late 2017 as part of a cull of various other far right groups such as Britain First.

Defend Europe's website says it is a 'Project of Generation Identity, Schönaugasse 102a, 8010 Graz. [3]