Eric Joyce is the former Labour MP for Falkirk and was the most expensive MP in the UK parliament in terms of expenses claimed in 2008[1]. Joyce is also the first MP to claim over £1 million in expenses[2]. Joyce chaired the Henry Jackson Society group on 'A Guilt Beyond Crime': The Future of Genocide Prevention in the Anglo-American Sphere in July 2009[3]. He is also known for being a regular user of social networking site Twitter[4]. He resigned from government in September 2009 after criticising the Labour leadership over the strategy and treatment of soldiers in the war in Afghanistan.[5]. Joyce's resignation was timed just before Prime Minister Gordon Brown was due to give a speech on Afghanistan. Prior to his resignation Joyce had been a Labour loyalist voting for ID cards, foundation hospitals, the Iraq war, student tuition fees, anti-terror laws, and against holding an inquiry into the Iraq war[6].

Support for the invasion and occupation of Iraq

Eric Joyce voted strongly for the war in Iraq and strongly against having an inquiry into the decision to go to war[7]. A profile in The New Statesman magazine describes Eric Joyce as an:

"Ex-soldier who said forces were racist and class-ridden in Fabian Society pamphlet. Now a PPS and perhaps strongest propagandist for Iraq war, he is often put up by the government on TV and radio.[8].

Eric Joyce served as a major in the British army from 1992-1998. He was suspended from the army in 1998 for accusing the army of "snobbery and public school bias", in a series of interviews and articles. He was on suspension for 18 months but received no further disciplinary action from the army. This prompted Conservative ministers to acuse the government of protecting Joyce. Shadow Defence Secretary at the time John Maples wrote to then Defence Secretary George Robertson asking about the officer's links to Labour and suggesting that ministers are "protecting" him. Joyce denied any direct links to Labour saying:

"It certainly doesn't have tacit approval on a day-to-day or even a month-to-month basis,". "I think what I'm saying is broadly in line with the modernising agenda which the government is promoting"[9].

In a parliamentary debate in 1997 Labour MP Harry Cohen argued that he didn't agree with Joyce being disciplined by the army. He quoted Joyce at length and argued that:

It emerged through the press that Lord Chancellor at the time Andrew Irvine had written to the Secretary of State for Defence advising him not to take action against Major Joyce because of the fear that, if the officer took his case to the European Court of Human Rights, any ruling would come up in the run-up to the next election, which "would not be good timing".[11].

Keith Simpson argued in a parliamentary debate surrounding the Joyce controversy that:

"I know that the Minister took up his appointment only in the summer of this year, but I emphasise to him that many members of the armed services believe that Major Joyce has had "political top cover". That may not be true, but that is the impression among many service personnel".[12].

Joyce left the army shortly after describing it as "being run by a coterie of white, male, privately-educated generals", He also said it was "rife with racism and sexism"[13]. He left the army in 1999 and was immediatley appointed as the Public Affairs Officer at the Commission for Racial Equality (Scotland) until being elected as MP for Falkirk West in the by-election of December 2000[14].

During the controversy over Joyce's article in the Fabian Society, George Robertson supported the claims made by Joyce about class predjudice and snobbery. He argued that "the army should recruit more officers from state schools to avoid the accusation of preserving a privileged elite".

Conservative MP Keith Simpson argued that Eric Joyce was being protected by the government over the row because he had government links. He argued that "there were links between Major Joyce and the Labour Party going back to before the general election, and that Major Joyce had advised John Reid, deputy to George Robertson, the Secretary of State for Defence, in Opposition.

John Reid denied the link arguing that he had "met Major Joyce just twice in his role as a member of the all-party defence study group"[15].

Eric Joyce has claimed the highest amount of expenses out of all UK members of Parliament in 2002/03, 2005/06 and in 2007/08. [16]. Eric Joyce was asked questions about his expenses and his relationship to Ross Martin on Newsnight Scotland by Gordon Brewer. Joyce hired Martin through his now defunct consultancy firm Networks Central Ltd, he had also hired Martin directly as a consultant on issues like "re-engaging the people of Falkirk with the political process"[17]. In the interview Brewer tackles Joyce over paying his close friend Ross Martin consultancy money from his incidental expenses which are for stationary, while also claiming £87,000 in staff costs. Over the course of the interview it emerges that Martin is an agent for the landlord who rents Joyce's constituency office while also being hired by Joyce on incidental expenses to carry out political consultancy. Brewer also raises Joyce's £180 expense claim for three oil paintings which hang in his constituency office and the issue of failure to pay capital gains tax[18].

In May 2009 it was widely reported that Joyce was seeking advice from HM Revenue and Customs regarding £40,000 in unpaid capital gains tax on the sale of his London home, which he had designated as his second home under the Second Homes Allowance scheme.[19][20][21] 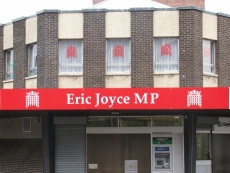 In October 2009 Joyce opened a new constituency office in Denny prompting complaints from the SNP. The new office is based in Denny and is only six miles away from the Falkirk office. Joyce said of the new office:

"I've had a lot of letters from people in Denny and Bonnybridge who want me to have an office nearby.

"I've not done it in the past because it would have been expensive but now that Denny town centre has been condemned, the new office is very cheap."[22]

In September 2009 Joyce resigned from the government arguing that public support for the war in Afghanistan would collapse "unless politicians are seen to treasure those who fight for us". In his resignation letter, Joyce, accused Labour colleagues of "petty, back-channel attacks". Joyce argued that:

"Service personnel, not big procurement projects or jobs, must come first in our thoughts and actions".

Joyce also criticised the United States in his resignation letter arguing that:

"For many, it seems that Britain fights; Germany pays; France calculates; Italy avoids. If the US is seen as valuing each of these approaches equally then I think they may well end up shouldering the burden themselves".[24]