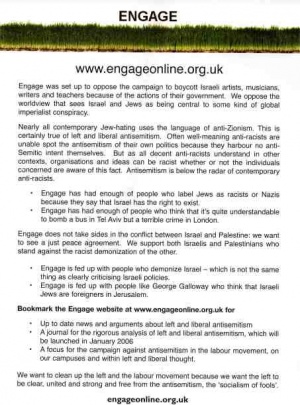 Engage was set up to oppose the campaign to boycott Israeli artists, musicians, writers, and teachers because of the actions of their government. We oppose the worldview that sees Israel and Jews as being central to some kind of global imperialist conspiracy.
Nearly all contemporary Jew-hating uses the language of anti-Zionism. This is certainly true of left and liberal antisemitism. Often well-meaning anti-racists are unable to spot the antisemitism of their own politics because they understand in other contexts, organisations and ideas can be racist whether or not the individuals concerned are aware of this fact. Antisemitism is below the radar of contemporary anti-racists.
Engage does not take sides in the conflict between Israel and Palestine: we want to see a just peace agreement. We support both Israelis and Palestinians who stand against the racist demonization of the other.

The literature and websites of Engage/Euston Manifesto/Democratiya seem to be produced by the same people. The style is identical: all repeatedly state "we are fed up with...". Another defining characteristic: The Euston Manifesto group/Democratiya/Engage had some of their principals present at the Compass Conference on 17 June 2006, and they pushed: (1) excluding Israel from policy discussion; (2) advocating interventions (Darfur, Iran).

"Engage has recently turned its ire on Jews for Justice for Palestinians because of their campaigning against the occupation. Before that their targets were Jews Against Zionism and organisers of the academic boycott like Stephen and Hilary Rose. All the while the main organiser of Engage - David Hirsh - claims to be a non-zionist and yet his own position on zionist rule is indistinguishable from that of another Engage 'contributor' - John Strawson - who ran for a seat on the World Zionist Congress under the banner of Meretz."[1]

NB: On 17 June 2006, at the Compass Conference in London, Democratiya had a stand with literature pertaining to: Euston Manifesto, Democratiya, and Engage. When the stall attendant was asked about the relationship between the three, he acknowledged that they were affiliated with programs run by the same people.

Members of Engage and Euston Manifesto make an appearance in this documentary made by David Aaronovitch. A transcript of the program can be found [2] (click on the "click here" button)