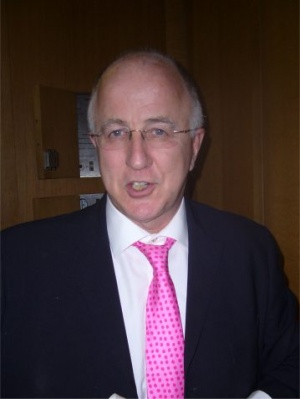 Denis MacShane (born Denis Matyjaszek on 21 May 1948) was the Labour MP for Rotherham (from 1994-2012).[1] He is a signatory to the statement of principles of the Henry Jackson Society and a member of the Labour Friends of Israel. He worked as a minister in the Foreign Office between 2001 and 2005. Since then he has been made a privy councillor and now represents the UK on the council of Europe.[2]Macshane was the partner of Joan Smith, a columnist for The Independent[3] and in 2013 was reportedly in a relationship with Vicky Pryce, the ex-wife of Chris Huhne the former Liberal Democrat MP. [4] In July 2013 the Crown Prosecution Service announced it had found "sufficient evidence" to bring a criminal charge against the ex-Labour minister for allegedly faking £12,900 of receipts. Macshane is due to appear at City of Westminister Magistrates' Court on 30 July 2013.[4]

In 1939, a Polish army officer named Jan Matyjaszek was shot and wounded fighting the Nazis. He returned to his village. As the war drew to an end, and the Red Army approached, he plunged his hands into buckets of soil. This was because it had become known that, if you had cracked and dirty hands, you would be identified as a worker and be allowed to survive, while those with the smooth hands of the officer class were shot. Matyjaszek passed the test, and left Poland shortly afterwards, travelling via Romania and France to Scotland. There he met and married a young girl from Donegal named Isobel MacShane, who gave birth in 1948 to a son they named Josef Denis.[5]

MacShane became the youngest ever president of the National Union of Journalists in 1978. In the 1980s he worked for the international trade union movement, supporting democratic trade union development in Poland, South Africa, Brazil and South Korea.[6]

In November 2003, MacShane was forced to alter the text of a speech he had planned to deliver in his constituency in the wake of the Istanbul bombings. In the original version he was to say that it was:

time for the elected and community leaders of British Muslims to make a choice: the British way, based on political dialogue and non-violent protests, or the way of the terrorists against which the whole democratic world is uniting".[7]

Following criticism from Muslims groups he delivered an altered version:

""It is time for the elected and community leaders of British Muslims to make a choice," he told the meeting in his constituency. "It is the democratic, rule of law - if you like, the British or Turkish or American way, based on political dialogue and non-violent protests like the one we saw in London yesterday - or it is the way of the terrorists.

"I hope we will see clearer, stronger language that there is no future for any Muslim cause anywhere in the world that validates or implicitly supports the use of political violence in any way," he said.

He added: "We need also to move away from talk of martyrs, and to make clear that jihads are no more to be endorsed or supported than BNP thugs who think that using violence against non-white Britons is politically acceptable." [8]

However, in July 2007, he wrote: 'I regret now my temporising'. In the same article, he published the altered version, implying that the furore was a result of the altered, less hardline version, rather than the original.[9]

In the leadup to the 2007 French presidential elections, MacShane supported Nicholas Sarkozy over the Socialist candidate Segolene Royal, who he said "has driven France's Jewish voters into Sarkozy's camp by appearing to endorse a venomous anti-Semitic attack on Israel by Islamist fundamentalists during a visit to the Middle East.".[10]

With Israel's declining image in the aftermath of its invasion of Lebanon, MacShane participated in the damage-control operation that relied on the familiar ploy of ascribing criticism of Israel to a resurgent antisemitism.

"So, predictably, just after Israel faced another image problem due to its murderous destruction of Lebanon, a British all-party parliamentary group led by notorious Israel-firster Denis MacShane MP (Labor) released yet another report alleging a resurgence of anti-Semitism (Report of the All-Party Parliamentary Inquiry Into Antisemitism, September 2006). To judge by the witnesses (David Cesarani, Lord Janner, Oona King, Emanuele Ottolenghi, Melanie Phillips) and sources (MEMRI, Holocaust Education Trust) cited in the body of the report, much time and money could have been saved had it just been contracted out to the Israel Foreign Ministry."[11]

It is worth noting here that when this report was issued, the committee had no status, and its members were self-selected. More tellingly, the committee was comprised exclusively of the supporters of the invasion of Iraq.

More recently, in his contribution towards the New Anti-Semitism campaign, Denis MacShane dispensed with any pretence of originality -- or subtlety -- altogether in publishing an op-ed in the Washington Post entitled 'The New Anti-Semitism', which he dramatically began by writing, 'Hatred of Jews has reached new heights in Europe'[12], however the only evidence he cites for his tendentious claims is a report by the aforementioned committee.

A New Labour MP, MacShane seems to have great admiration for Margaret Thatcher. He called Chavez 'sensible' because he was behaving as a 'Thatcherite', but he found the 2002 coup predictable.

What has happened in Caracas is no surprise but it should be a warning', wrote MacShane, went on to label Chavez 'a ranting, populist demogogue'. He went on to add, 'Hugo Chavez, the former President, was a political leader who lived by permanent mobilisation...This week the people of Venezuela did mobilise, but it was against Señor Chavez.[13]

The president was restored to his seat of course -- by popular mobilisation.

In the face of the subsequent embarassment, MacShane has tried to recast his endorsement of the coup as a call for the restoration of Democracy. Except, his exact statement was 'Venezuela now needs to move swiftly to restore full democracy' -- as opposed to Chavez's democracy, which presumably wasn't 'full'. MacShane is also sceptical of the Venezuelan people's capacity to act in their best interest since he is convinced they 'deserve better' than the government they elected. Incidentally, most Venezuelans hold exaclty the same view of the British people.[14]

For an admirer of Thatcher, he seems to show a great deal of concern for the poverty of 'social justice' in Venezuela. Even the conservative Financial Times was left bemused by MacShane's glee at the overthrow of the democratically elected government of Venezuela (April 15, 2002). It wrote, 'at least the White House did not go as far as Denis MacShane, British junior foreign office minister. MacShane described in The Times newspaper on Saturday how Chavez had at times acted as a "ranting, populist demagogue"'. However, MacShane charitably lays our fears to rest: 'Hugo is no Hitler'.

Sir, You report that I work for United Utilities. This is untrue. I did some consultancy work in 2006 mainly to untangle some real problems they had in Bulgaria, which was cleared by the House authorities and undertaken with the support of the government and our embassy there. I was paid £15,000, which was in the Register. But I have no relation with UU. Denis MacShane, Labour, Rotherham.[21]