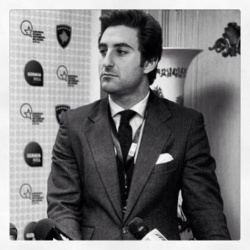 Korski is a former strategic adviser and spokesman for Catherine Ashton, high representative of the union for foreign affairs and security policy for the European Union. He has also worked for Andrew Mitchell, the former Conservative chief whip.

In November 2016, it was revealed Korski is planning to launch a 'govtech' fund that will invest in public sector technology projects. [2]

Korski has worked in different positions in London, Washington DC, Iraq, Yemen and Afghanistan. He was deployed to Kabul, Afghanistan, in 2005 to advise President Hamid Karzai's government, and in 2007 he ran the Provincial Reconstruction Team in Basra in Iraq, overseeing the post-conflict reconstruction of Basra province. He also was seconded to the US State Department under then Secretary of State Condoleezza Rice. [3]

Before working for the British government, Korski worked in Parliament as a policy adviser to the House of Commons Defence Select Committee. In 2008 he helped establish the bi-partisan think-tank the European Council on Foreign Relations. He has written for The Spectator, The Guardian and the New York Times. [3]

The European Voice reported on Korski's appointment as Ashton's adviser in in March 2012:

Before joining the European Council of Foreign Relations, where he ran the Middle East programme, the Danish national was a defence and security adviser at the UK's Department for international development. In 2007, he was head of the UK and US provincial reconstruction team in Basra, southern Iraq. He worked as head of political and military affairs for Paddy Ashdown when he was High Representative in Bosnia and Herzegovina. All this is supposed to make him a specialist in post-conflict reconstruction, which some would say is the best possible preparation for working in the Ashton team. [4]