From Powerbase
(Redirected from Christina Robinson)
Jump to: navigation, search

Christina Robinson (née Lineen) was a special adviser to UK health secretary Jeremy Hunt. She was appointed in September 2012 after just over two years as head of communications at Circle, a social enterprise and private healthcare provider which runs six hospitals.

Robinson is also a former aide to UK health secretary Andrew Lansley with whom she worked for two years until July 2010 and former parliamentary researcher for Stephen Crabb MP from 2007 and 2008. At Circle she replaced Nick Seddon, who left in early 2010 to join the think tank Reform as deputy director.[1] After Circle she had a brief spell as head of policy and public affairs at World Vision.[2] 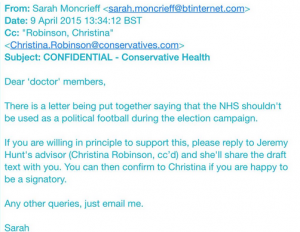 In April 2015, in the build up to the 2015 General Election, more than 140 top doctors signed a letter criticising the coalition government's record on the NHS.[3] In response, the Conservative Party, through Robinson, organised a letter to be signed by doctors not wanting the NHS 'to be used as a political football during the election campaign'. The email was leaked on Twitter.