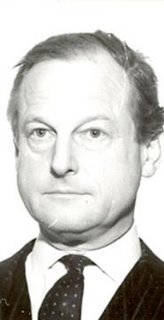 Charles John Lister Elwell (16 May 1919 – 11 January 2008) was an MI5 officer best known for exposing the ‘Portland spy ring’ in 1961. Dubbed MI5’s “Witchfinder-General” by the Observer, [1] Elwell also spent much of his career smearing left of centre politicians, charity workers and trade unionists, first in MI5’s F branch and then privately for the Institute for the Study of Conflict and the right-wing activist David Hart.

Elwell was educated at Haileybury College and St John's College, Oxford, where he read modern languages. He served in the Royal Navy during the war and then spent four years in temporary appointments in the Foreign Office, including the posts of vice-consul in Tangier and private secretary to the British Ambassador in The Hague.

In 1949 Elwell joined the Security Service and the following year married an MI5 colleague Ann Glass, who later joined the Information Research Department. [2]

After a year in the overseas branch, Elwell was sent to Security Intelligence Far East, a joint MI5/MI6 organisation in Singapore, where he served two tours, returning to London in 1955. He was then posted to MI5’s counter-espionage branch and served in several of its sections until 1965. [3]

Elwell was next seconded as a security adviser to the Ministry of Defence for three years, and was promoted to Assistant Secretary rank in 1966. On his return to MI5 head office, he went back to counter-espionage, where he stayed until 1974. [5]

During this time Elwell became convinced that the government of Harold Wilson had been infiltrated by communists. An important source of this dubious intelligence was a low-grade Czech intelligence officer who defected in 1969. The Guardian journalist David Leigh records in his book The Wilson Plot that among those the defector denounced was John Stonehouse, postmaster general in Wilson's government. Wilson summoned Elwell to repeat the charge that Stonehouse was a Czech agent to the minister's face and later asked MI5 if they had any evidence that his minister was lying. They had not. [6]

In 1974 Elwell was moved to MI5’s F branch which targeted ‘subversives’. According to The Guardian, he continued to see “communist threats and conspiracies, notably among Harold Wilson's political colleagues and friends, where there were none.” [7] According to Christopher Andrew, Elwell served as F1/0 (head of F1 section) from April 1974 to May 1979.[8]

Elwell’s targets whilst at F branch included Patricia Hewitt and Harriet Harman, who were general secretary and legal officer of the National Council for Civil Liberties (now Liberty) in the 1970s. He also targeted trade union leaders including Harman's husband, Jack Dromey, who had played a leading part in the Grunwick dispute, Jack Jones, the transport workers' leader, and Hugh Scanlon, president of the engineers' union, the AUEW. ‘Fact sheets’ on trade union leaders were regularly distributed to 10 Downing Street and selected ministers. In 1977, Scanlon was prevented from becoming chairman of British Shipbuilding because MI5 advised that he should not see documents marked confidential or above. [9]

After his retirement from MI5 in 1979, Elwell continued to produce smears of ‘subversives’, now working for privately funded think-tanks. He joined the Institute for the Study of Conflict where he produced regular bulletins called Background Briefing on Subversion. In 1983 the Social Affairs Unit published Elwell’s Tracts Beyond the Times - A Brief Guide to the Communist and Revolutionary Marxist Press. [10]

Elwell’s Background Briefing on Subversion was later funded by the anti-union activist David Hart and it became British Briefing. [11] As the author of British Briefing, Elwell continued with his paranoid and sometimes bizarre exposés. One issue of British Briefing published in 1989 condemned the housing charity Shelter for 'Communist affiliations' and the World Council of Churches, for its support for the Institute of Race Relations. [12] One Elwell briefing from this period warned of "the problem of Christian left wing groups" and named the Jubilee Group, whose members included a future Archbishop of Canterbury, Rowan Williams, as "the best known and probably most influential".[13]

Even Elwell's former colleagues at MI5 reportedly took the view that he had overstated the danger posed by such groups, and when British Briefing was wound up in 1990, it declined to take over his files. [14]