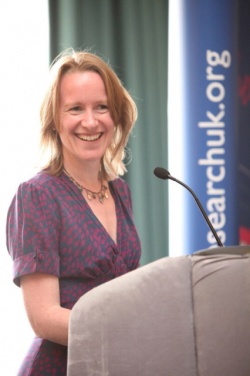 Carolan Davidge is director of communications for Cancer Research UK. She was on the board of the Science Media Centre from 2005-2011 and since then has been a member of its advisory committee. She is also a trustee of CharityComms the professional membership body for charity communicators.

Davidge 'was born in Northern Ireland, but her father was in the air force, so she lived all over the world and attended 13 different schools'.[1] Davidge is 'based in Cambridge with her husband and two children';[1]and is said to have a ‘soft, friendly manner’.[1] Davidge says she has 'always been excited by social issues and causes. "I see my achievements for people rather than profit," she says'. [1]

While at the MRC Davidge defended the MRC funded nutritionist Susan Jebb over a conflict of interest story. The story emerged from 'a press briefing on "faddy diets" organised by the Science Media Centre'[2] Jebb had denounced the diet as a 'major heath risk'[2] on 12 August 2003.[3] The Mail reported that[4]

She is now accused of a conflict of interest because the Medical Research Council (MRC) for which she works received £20,000 for two reports both written by Dr Jebb from the Flour Advisory Bureau, which represents the flour-milling industry. Producers of bread, pasta and other high-carbohydrate foods have complained of a fall in demand in the wake of the huge popularity of the Atkins diet.
…Dr Jebb insisted its findings would be totally independent of any funding. 'I don't see it as a conflict of interest at all,' she said. 'I am simply bringing to the public's attention the scientific evidence.

Carolan Davidge appears to have attended the briefing and was cited in the press in defence of Jebb. The Mail quoted her as follows:

'There is little evidence that low amounts of carbohydrates are better for you than a high amount. You don't have to be much of a scientist to see that's what the evidence shows.' Carolan Davidge, spokesman for the MRC, which receives annual government grants of 400million, defended Dr Jebb.
She said: 'The majority of the centre's work comes from the Department of Health and the Food Standards Agency, but they do some with industry.
'Dr Jebb has an international reputation and this work will be peer reviewed, just like any other study.'[4]

According to the BMJ:

Ms Davidge said: "Dr Jebb is not receiving £10 000 herself for working on the Flour Advisory Bureau report. The research unit is being paid as part of its overall funding arrangements."
She considered that funding of £10 000 would not influence Dr Jebb's scientific judgment. She acknowledged, however, that scientists have to deal carefully with any apparent conflicts of interest—even though she considered that these had been openly disclosed in this case.
"It is something that the scientific community has to give thought to. Scientists have to satisfy the need to be being seen to be independent. It is important that scientists consider how to meet this need," she said.
Listing all sources of research funding every time a scientist speaks may not be the most practical way forward, she suggested. "But it is important that the scientific community thinks how best to meet this need."[2]

Davidge was also cited as saying that:

"She could be commissioned by anybody to produce independent research. If the Atkins Diet people asked her to do some research she would do it independently.
"The idea that anybody would think that she would compromise her standing as a scientist and her independence for pounds 10,000 is just ridiculous."[5]

According to a PR Week profile:

The most satisfying moment of her career was being part of the campaign that persuaded the Government to make Britain smoke-free in 2007. 'There was a group of us that planned that campaign, and we can say we made that happen,' she smiles. [1]

Davidge is a supporter of evidence based science communications:

While removing smoke from public places is one battle, curing cancer is quite another. CRUK has a fine balancing act to perform between demonstrating progress and encouraging ongoing donations. It also needs to avoid scaring people or giving them unrealistic expectations. Navigating rigid media is also tricky - a brief glance at the Daily Mail's headlines shows what the comms team is up against.
Davidge has a strict policy. 'Anything we say about reducing your risk of cancer or increasing early diagnosis is evidence-based. And while we point out risks, we don't want to make people feel they can't do things. If we tell people not to drink, for example, it will fall on deaf ears,' she says. [1]