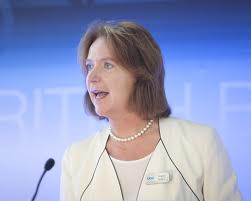 In April 2012 she announced she would step down in July after five years as "the voice of banking and financial services" during the most tumultuous period in the industry's history. She is now chief executive of the new trade body Energy UK, which was set up in April to represent 70 companies in the energy sector, 'from small electricity generators and energy services companies to large vertically-integrated utilities'. [1]

Knight is a former Conservative MP and economic secretary to Kenneth Clarke.

In December 2015, Knight was appointed as the chair of the Office of Tax Simplification.[2]

She was chief executive of the Association of Private Client Investment Managers and Stockbrokers (APCIMS) from September 1997 to December 2006. She was deputy chairman of Scottish Widows and a non-executive director of Lloyds TSB plc and a trust member of the Port of London Authority.

Knight was previously the Member of Parliament for Erewash (1992–97) and Economic Secretary to HM Treasury between 1995 and 1997 under Kenneth Clarke.[3]

Knight is a non-executive director on the boards of: