The Alcohol Research Group was based at the University of Edinburgh and was set up with funding from the Scotch Whisky Association in 1978. It later received core funding between 1990-95 from the drink industry funded Portman Group. Controversy dogged the group as a result of conflicts of interest connected to the funding relations with the drinks industry.

The ARG was based in 1988 in 'a crumbling wooden hut attached to the Department of Psychiatry in the University of Edinburgh'[1] adjacent to the Royal Edinburgh Hospital in Morningside on the South of the city. In 1988 Plant noted that 'none of the Group's full members hold tenured University positions.' [1] When the Group became controversial, this precarious position would make it easier for the University to dissociate itself from the group.

Controversy about Links to alcohol industry 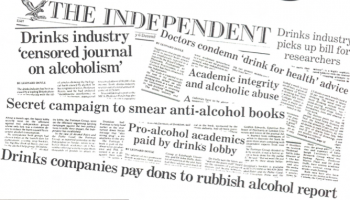 The ARG came under threat following several articles in the Independent in December 1994. The first of these, though it did not mention the Edinburgh group, was in the end the most damaging, since, some tie later it connected to a member of the group. It revealed that:

British academics are secretly being paid thousands of pounds by the drinks industry to challenge the conclusions of a book on alcohol being published tomorrow under the auspices of the World Health Organisation and Oxford University Press. The payments come from the Portman Group, a lobbyist for eight of Britain's largest drinks producers, including Guinness, International Distillers & Vintners, Seagram and Whitbread. The book, Alcohol Policy and the Public Good, edited by Griffith Edwards, Emeritus Professor of Psychiatry at the University of London and former head of the National Addiction Centre, claim that the best way to pre-vent alcohol misuse is to reduce overall consumption.[2]

The Independent revealed that alcohol researchers had been offered £2,000 each by the Portman Group 'to challenge the book's conclusions. Portman says four or five have accepted, but it will not name them. Their conclusions are to be published under the name of the Portman Group, said the Portman director of strategy, George Winstanley.'[2]

One of those approached was Nick Heather of the Centre for Alcohol and Drug Studies in Newcastle upon Tyne. In a letter to him, Mr Winstanley said he had obtained a pre-publication copy of Alcohol Policy and the Public Good from Copenhagen and spelt out seven areas in which he wanted the academic to counter the book's arguments. He offered Professor Heather a £2,000 fee, plus 'travelling and accommodation expenses for the panel session'. Professor Heather rejected the offer, calling it 'disgraceful'.

'The Portman Group is using sleaze tactics to try to undermine this work,' Professor Edwards said. 'It is the result of an extensive review of scientific research by 17 contributors from nine countries, none of whom has been paid a penny or will receive any royalties. By offering money and anonymity to academics to attack their colleagues, the industry has poisoned the springs of healthy academic debate.'[2]

The next day's Independent put the ARG squarely in the frame by pointing to its funding connections to the alcohol industry. The front page report led with the following paragraph:

The salaries of two prominent British academics, both active in the campaign to relax government drinking guidelines, are being paid to the University of Edinburgh by the Portman Group, the drinks industry's lobbying organisation, the Independent has learned.[3]

The paper went on to note that:

Recent scientific findings suggest that for some groups of people moderate drinking has beneficial health effects. These findings have provided ammunition for the drinks industry and have already resulted in a re-view by the Department of Health into the Government's sensible drinking message. Government advice - supported by the World Health Organisation - is that if men drink 21 units of alcohol a week (a unit is half a pint of beer or a measure of whisky), and women drink 14 units, they are unlikely to damage their health.
Dr Duffy says the limits are seat-of-the-pants stuff based on the opinions of a group of doctors and health lobbyists, and says drinking 26 to 30 units of alcohol a week reduces the risk of coronary heart disease. Both academics say it is better to drink than to abstain and are regularly quoted as saying that drinking has tangible health benefits and that scientific evidence supporting this view has been almost a dark secret until recently.

In a separate piece on page three of the paper, the Independent reported:

Most controversially, however, the [Portman] group pays the salaries and expenses of Edinburgh University's Alcohol Research Group whose two leading figures, Professor Martin Plant and Dr John Duffy, have written academic articles without citing their drinks trade funding. Both men have also been quoted in the media in Britain, Canada, the United States and Australia challenging the World Health Organisation's advice on safe drinking without apparently declaring a possible conflict of interest.[4]

In a letter by way of response, written the same day, Plant denied that he had 'been active in opposing the "World Health Organisation's advice on safe drinking"'. He also stated that 'In accordance with standard procedures, all journal articles and books by members of the ARG have acknowledged related sources of funding. Details are further elaborated in the ARG's annual reports.'[5]

Core funding from the Scotch Whisky Association was given to the University of Edinburgh 'on the clear understanding that there were no strings attached and that the ARG was to be completely free to operate. The Portman Group took over this core funding in 1990 with the same written guarantee of freedom. Throughout this period the ARG has been left to conduct its work without any form of interference or impediment whatever.'[5]

Plant went on to state that 'I believe that it is proper for the drinks industry to support research into alcohol and its problems. I also believe that it is sensible to judge the value of research not on the basis of which agency funds it, but in relation to the integrity of the researchers and the quality of their work.'[5]

Asked if he saw himself in a position of conflict because of the funding from the industry, he said: "That is a reasonable question but my colleagues and I have had total freedom without any constraints, although we have had substantial drinks industry funding."[6]

Plant in other words did not admit to any doubts about the conflict of interest he and the research group faced. Nor, it can be said did he and Duffy always admit to the fact of the funding from the industry in their publications.

The other allegation that Plant had denied was that he had 'not been active in opposing' WHO advice on safe drinking. The Independent, however, had only alleged that Plant and Duffy had been quoted 'challenging' WHO advice.

By lunchtime yesterday Professor Martin Plant and John Duffy looked like a couple of men in need of a stiff drink. Their problems started early in the day when a newspaper report described how their jobs were being funded by the Portman Group, which is in turn funded by the drinks industry. To two of Britain's leading figures in alcohol research, the link appeared - on face value - damaging. Both men spent a good deal of yesterday insisting that such a conclusion would be wrong. By late morning their fifth-floor offices at Edinburgh University's Alcohol Research Group had been put under what amounted to a minor press siege. Interest in the report carried on the front page of the Independent was fuelled by the high media profile enjoyed by Mr Duffy and Prof Plant, in the latter's case for nearly two decades.[7]

According to Martin Plant, writing in 1988, 'the past and current work of the ARG has been greatly assisted by the presence of a number of clinicians and researchers who are also based in Edinburgh'. these included Dr Jonathan Chick, Mr John Duffy, Prof Robert Kendell, Prof Norman Kreitman, Mr Dave Peck, Mr Ian Robertson and Dr Bruce Ritson.[1]

According to Martin Plant, writing in 1996, the Group was in receipt of funding from the following sources:

Between 1978 and 1990 it received core funding from the Scotch Whisky Association. Since 1990 core funding has been provided by the Portman Group. The activities of the ARG have also been supported by the AIDS Education and Research Trust, the Alcohol Education and Research Council, the Bank of Scotland, the Brewers' Society, the Department of Transport, the Economic and Social Research Council, Ethicon Ltd, the Gannochy Trust, William Grant and Sons Ltd, the Health Education Board for Scotland, the Home Office, the Hope Trust, the Bill Kenyon Education Trust, Lothian Regional Council, Marks and Spencer PLC, MacGregor and Company, the Medical Council on Alcoholism, the Medical Research Council, the Mental Health Foundation, Renewal Clinics, the Robertson Trust, the Scottish Health Education Group, the Scottish Office, the Wellcome Trust, the Western Isles Health Board, the World Health Organization, and by two anonymous charities.[1]

In an earlier account of the group, in 1988, Plant had also named the Ministry of Health and Social Welfare (Canada) and the Society for the Study of Addiction to Alcohol and Other Drugs.[1]