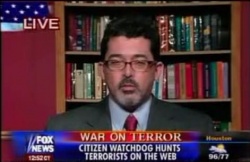 Andrew Aaron Weisburd is a campaigner disrupting websites which he believes are a threat including Islamic websites. He is part of a network of amateur 'cyber terrorism experts' in the US and Britain, linked to extreme right wing Zionist groups.

Born in New York in 1964 Aaron Weisburd is a Jewish American [1] who describes himself as a "good ole boy". [2] He is a computer programmer and web designer by trade but quit his job to run Internet Haganah. He told The Atlantic Monthly that he started Internet Haganah 'because he was mad--mad that Yasir Arafat had rejected the peace plan at Camp David in 2000, mad that al-Qaeda had blown up the buildings in Manhattan he grew up around, and mad because he had read that Hamas was teaching Palestinian kindergartners to hate Israelis. [3] 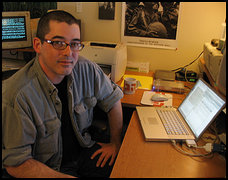 Aaron Weisburd in his home office

Weisburd has stated that the 'primary inspiration' for his 'own efforts' was John Galt, the web designer who set up Islamic News for the British 'expert' Glen Jenvey. He also credited the Christian right winger Jeremy Reynalds and fellow IT technician Jim Ownbey with encouraging him to set up Internet Haganah. [4]

Internet Haganah was registered on 19 October 2003 and Weisburd began to appear in the media shortly afterwards. The first record the Internet Archive has for the website is dated 7 December 2003. The homepage stated the group was "Confronting Islamist terrorists and their supporters online" and "Defending Israel and the Jewish people". It also requested payments to the 'Haganah Fund', which at that stage it said had raised $5,800 in donations. [5] Internet Haganah is reportedly a one man operation run out of Weisburd's home office in Carbondale, Illinois. [6] The Atlantic Monthly described Weisburd's operation as follows:

Weisburd is the only paid full-time member of Internet Haganah. He runs his operation from the second-floor office of his home. Surrounded by five computers, he trawls online in search of the press statements and videos that terrorists release to rally their supporters. He goes undercover, logging on to restricted forums (if he has been able to get a password) and visiting the many open sites advocating jihad. He doesn't speak Arabic but insists the limitation doesn't slow him down much. Though he relies on translation software at times, and on associates in Internet Haganah's network who speak Arabic, linguistic comprehension isn't his goal. [7]

By April 2004 Weisburd claimed that he had facilitated the closure of over 420 alleged jihad sites by targeting the internet service providers. [8]

Although Weisburd works at home alone, he is part of a network of online activists. In 2005 The Washington Post reported that Weisburd and others like him had 'managed to put together well-organized operations that run almost like companies'. [9]

Along with several likeminded individuals Weisburd was involved in monitoring the online activities of Younes Tsouli, known by his internet pseudonym Irhabi 007.

In 2004 Weisburd successfully lobbied Tsouli's internet service provider to have his website taken down. He also passed on information to the US and British police of Tsouli's general whereabouts, having narrowed him down to the Ealing area of London based on his IP address. [10]

Tsouli was arrested in October 2005, apparently independently of the 'intelligence' provided by Weisburd and others (notably Evan Kohlmann). The case attracted enormous media attention, focusing on the use of the internet to promote terrorism. Tsouli was said to be a key figure in what has been dubbed ‘cyber-terrorism’. The Guardian called Tsouli the “godfather of cyber-terrorism for al-Qaida”.[11] Tsouli and two other mem were charged with “using the internet to incite murder”. According to the evidence at trial, Tsouli had posted material onto websites supporting Al-Qaeda, whilst his co-defendants provided him with stolen identities and credit card details. He boasted that he was their “favourite files-uploader online”.[12]. Although Tsouli was sentenced to 24 years in jail, Judge Openshaw said of Tsouli that he “came no closer to a bomb or a firearm than a computer keyboard”.[13] Fellow cyber terrorism expert Evan Kohlmann submitted what he called an Expert Report in the case but he acted as a fact not expert witness.[14]

Weisburd runs Internet Haganah a project of the Society for Internet Research and 'endorses' two other organisations: The Intelligence and Terrorism Information Center and the Global Justice Group Inc.. The former is run by a retired colonel in Mossad the Israeli intelligence agency and maintains an office inside the Israeli defence ministry.