Difference between revisions of "Simon Barrett"

Simon James Barrett (born 5 December 1974) is a British neoconservative who served as an advisor to Patrick Mercer and set up a number of alarmist organisations promoting confrontation with Iran. He has most recently worked at the Henry Jackson Society and the Sudan Action Group. In November 2014 he was appointed as BICOM's Head of Media. [1]

Barrett claims to have worked as an ‘Advisor to the Conservatives Frontbench Spokesman for Homeland Security on issues relating to Islamic Terrorism and Iran.’ [2] If true this means that Barrett became an advisor to Patrick Mercer at some point after July 2003 when Mercer was appointed to that post. [3]

After working for Mercer, Barrett set up several neoconservative groups. His earlier projects appear to have been carried out with the backing of Trevor Horn and his wife Jill Sinclair, the owners of SARM Studios. Jill Sinclair, who went into a coma after an accident in June 2006 was a prominent supporter of Israel. 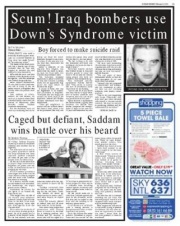 At the beginning of 2005 the Sunday Express starting quoting Barrett as an expert on ‘terrorism’. The first such appearance was in February 2005 when the Sunday Express covered the story of a 19 year old Iraqi man with Down’s Syndrome who was reported to have been used unwittingly as a suicide bomber. The article quoted Patrick Mercer as saying: “This shows us exactly the sort of murderous scum with whom we are dealing. Let no one be in any doubt that they will try to apply these sort of tactics wherever and whenever they can, and we let our guard down at our peril.” The article then quoted Barrett who compared the case to the actions of Palestinians in the Occupied Territories saying: “This is not just happening with Iraqis. Palestinian children have also been educated with hatred to become suicide bombers. We must be resolute in protecting children and the vulnerable from terrorists.” [4]

The article referred to Barrett as ‘a spokesman for Terror Aware, a group that monitors the Middle East media’. Barrett registered the web domain terroraware.co.uk later that year on 25 May and on 6 June set up a company Terror Aware Ltd. 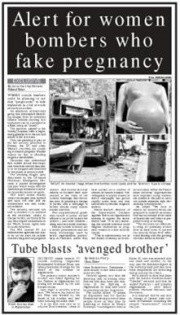 The company was registered to Unit 19, Cygnus Business Centre in Neasdon, North-West London, the address of the SARM Workshops. Terror Aware Ltd was later struck-off and dissolved in September 2007 having filed no accounts or annual returns at Companies House. The website never went live and press references to the organisation disappeared after a few months, with Barrett instead being referred to as the director of the ‘International Coalition Against Terror’ in two articles in 2005. In one of the two articles the Sunday Express claimed that there was a risk that Muslim women in Europe and North America ‘could be planning to use fake ‘pregnancies’ to hide explosives in a bid to evade security searches. The source for the story was the US based Northeast Intelligence Network. Barrett again linked the scare story to the Palestinians:

“It is very alarming that suicide bombers could disguise themselves as pregnant women to evade security checks. This is unfortunately not in the realms of fantasy as terrorist recruiters within the Palestinian terrorist organisations have exploited young vulnerable women in the past to carry out suicide missions with devastating consequences. We have to ensure our security forces are prepared to confront an enemy that has no concept of the value of human life and which is prepared to stop at nothing. The terrorists are effectively using our politically correct laws as their cover to prevent the security forces from effectively dealing with the growing terrorist threat in Britain.” [5]

By early 2006 the short lived ‘International Coalition Against Terror’ was superseded by a new organisation called International Media Intelligence Analysis (IMIA). The first press reference to IMIA was in the Sunday Express in February 2006. [6] It was incorporated as a UK company on 5 August 2005. On 9 August Barrett registered the domains I-M-I-A.org and I-M-I-A.com [7] – though like terroraware.co.uk the websites never went live. Like Terror Aware Ltd, International Media Intelligence Analysis was registered to a business address of SARM Studios. The registered address at Companies House was initially SARM UK Ltd, 8 - 10 Basing Street, London W11 1ET, although after tens days the reference to SARM UK Ltd was removed from the company’s official address. Barrett was the sole director of the company, whilst the Zionist accountant and businessman Colin Wagman served as company secretary. [8] The company had two issued shares, one held by Barrett and the other by Jill Sinclair. [9] The company was dissolved on 14 April 2009.

International Media Intelligence Analysis is referred to in some press articles as a London based think-tank, but in fact it appears to have operated merely as an e-newsletter service run solely by Barrett. In 2007 it was described on the website of Réalité-EU (see below) as follow:

International Media Intelligence Analysis (IMIA) offers a new searchlight focusing on news and developments within the Middle East and that region's impact on the rest of the world.

IMIA, a European-based organisation with global reach, provides facts, insights and analysis on key developments and trends in the Middle East. IMIA exposes the threats from state sponsors of terrorist organisations, extremist leaders and groups, financing of terrorism, proliferation of nuclear weapons, human rights violations as well as counter terrorist organisations' initiatives. IMIA offers an informed and accurate view of developments taking place in the troubled and volatile region of the Middle East - a region that has far reaching implications for the rest of the world.[10]

In 2007 Barret was involved in a new e-publication called Réalité-EU. Its website was registered on 19 December 2006 and launched in January 2007. The website explained the new organisation’s purpose as follows:

REALITE-EU is a website and e-newsletter for journalists, leaders and key analysts that focus on developments in and around the Middle East which pose a threat to Europe and beyond.

REALITE-EU is affiliated with International Media Intelligence Analysis (IMIA). IMIA, like this new e-publication REALITE-EU is an organisation of global reach that exposes threats from state sponsors of terrorism, terrorist financing, nuclear proliferation, suppression of human rights, and related issues.

REALITE-EU will provide the latest thinking on breaking news and long-term trends on these and other issues as well as give reporters lists of experts to interview. [12]

Réalité-EU confirmed by email on 14 July 2009 that Barrett was no longer with Réalité-EU. [13]