Vincent James Harvey is a former senior police officer who served as Director of the UK Division at the National Criminal Intelligence Service 1998 to 2003.[1] Prior to this he had been a Special Branch officer including serving as an undercover in the Special Demonstration Squad. For the purposes of the Undercover Policing Inquiry he was also referred to by the cipher HN354 (for the N cipher system see N officers).

While with the SDS he used the cover name Vince Miller to infiltrate the Socialist Workers Party from 1976 to 1979.[2] According to Sir John Mitting, Chair of the Undercover Policing Inquiry, the officer's 'deployment appears to have been unremarkable, despite the fact that he admitted four 'fleeting' sexual encounters with different females during his deployment - two of them with female members of the Walthamstow branch of the Socialist Workers Party. Mitting ruled the officers real name would be restricted.[3]

One of those from Walthamstow SWP was 'Madeleine', who was granted core participant status in the Undercover Policing Inquiry on 6 January 2021. While Harvey had initially characterised the relationship with her as a one night stand, Madeleine stated that the relationship lasted ‘upto two months’ and the potential of the relationship lasting seemed to her ‘to hold out a lot of promise’. She also provided material disproving Harvey's assertions.[4].

Following the statement from 'Madeleine', Mitting decided in March 2021 to revoke the restriction order over the real name.[5] In April 2021 both the undercover and 'Madeleine' gave live evidence during the Tranceh 1 Phase 2 of the Inquiry's evidential hearings. However, the restriction order over his real name was not revoked until September 2021 and it was subsequently made public.[6]

As an SDS undercover officer

A full profile of Harvey's time as an undercover police officer is being prepared.

Photographs of Vincent Harvey, while undercover as 'Vince Miller', provided by 'Madeleine'.

Operation Pragada ran from 1993 to 1994, the second of four investigations of sexual abuse of children in the care of Lambeth Council. Harvey, then a Detective Chief Inspector, was appointed by Deputy Assistant Commissioner Ian Johnstone to look into allegations that Lambeth Council employees were involved in making and distributing making child pornography.[7] It ran concurrently with Operation Bell (1992-1994) which focused on sexual abuse by care worker Leslie Paul.[8][9]

These investigations, which also include Operations Middleton and Winter Key, were examined in detail by by the Independent Inquiry into Child Sexual Abuse (IICSA) as part of its wider remit examining historical child sexual abuse in Lambeth care homes. As such, Operation Pragada is addressed in a witness statement made by Detective Inspector Simon Morley of the Metropolitan Police Service. Unfortunately, it appears that much of the material regarding Op. Pragada in this statement has not been made public, and the underlying documents were only seen by DI Morley.[7][10]

A opening statement made behalf on some of the core participants in IICSA noted:[10]

DI Morley acknowledges that allegations of making and distributing pornography involving children were not thoroughly investigated by Operation Pragada. He records that that Lambeth did not want the police to dig too deeply. LAG1 ... was never interviewed on the wider allegations of child sexual abuse that she made. These are allegations that have remained uninvestigated since they surfaced ... in 1993. At present, this inquiry has relied on what DI Morley has uncovered of this issue and its investigation. Unfortunately, DI Morley doesn't pose the all-important "Why?" question: why wasn't crucial evidence followed up? None of the underlying documents from, for example, Operation Pragada, have been disclosed.

The operation came in for criticism by IICSA, which noted that opportunities to identify networks and links between offenders were missed by detectives.[11] IICSA on Lambeth council noted:[12]

Detectives failed to identify and investigate networks and links between offenders, despite the important and relevant information they held which should have been followed up. For example, when investigating the production of indecent images of children there was no liaison between the officers within Operation Pragada and Operation Bell to seek any material or information about Leslie Paul.

Another aspect of Pragada was to investigate allegations made by an individual identified publicly only as LAG1. According to IICSA:[13]

That investigation was concluded in 1993 following CPS advice that no further action be taken. LAG1 is understood to have made further allegations in 1994. Again, it is understood that these did not change the position and that a closing report by DCI Vincent Harvey concluded that LAG1’s allegations lacked credibility. 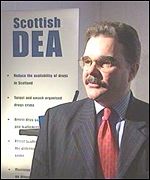 In 1998, Harvey is named Director of National Criminal Intelligence Service (NCIS) as head of its UK Division, a title which later became UK Tactical Services Division. This appears to have been at rank of Assistant Chief Constable.[14]. He held the position until 2002, when he is succeed by Keith Bristow.[15] During this time he is one of the NCIS's senior managers, answering directly to the Director General John Abbott.

According to archives of the NCIS website, the UK Division 'targets UK serious and organised crime as it effects the UK' and included:[16][17] the NCIS regional offices in Midlands, North East, North West, Scotland, South East and South West and the Strategic and Specialist Intelligence Branch which was subdivided into:

During his time at the NCIS, it had responsibility for the Animal Rights National Index (a forerunner of another undercover policing unit, National Public Order Intelligence Unit and the National Domestic Extremism Database. It had wide ranging surveillance powers, including telephone and email interception and covert surveillance, though it is not known if it had its own undercover unit.[18][19]

In April 2001, he gave evidence to the Northern Ireland Assembly Ad Hoc Committee on the Proceeds of Crime Bill,[20] while in 2003 he appears to have had specific responsibility for the economic crime unit as the director of Specialist Intelligence.[21] The NCIS website notes it responsibilities as:[22]

Media appearance while with the NCIS

Vince Harvey made a number of media appearances during his time as a Director of the NCIS:

These are thoroughly unpleasant people who don't mind using any technique if it furthers their own cause.

Every image of a child being sexually abused is an image of a crime scene and each photograph is that of a victim. Using the sophisticated technology along with traditional detective and analytical work, we can now make sure there is no place for paedophiles operating online to hide.

Vince Harvey of NCIS as he appears in a BBC news special investigation on organised crime in Essex, November 2000

In the unlikely event that any member of the public can be prompted to give evidence about his deployment publication of his cover name would serve that purpose.' Publication of real name is not necessary to permit the Inquiry to fulfil its terms of reference and would give rise to interference with his article 8 rights to private and family life.

It is, however, imperative that the risk of a seriously adverse impact on his immediate family member is not run. Madeleine accepts that it should not be. For that reason, the Inquiry will not publish the real name of HN354 before the risk has passed; and it will not be revoked before he gives evidence.