The Hijacking of British Islam

The Hijacking of British Islam was a report published in October 2007 by the right-wing think-tank Policy Exchange. It was revealed by BBC Newsnight as being based in part on fabricated evidence.

The full title of the report was The Hijacking of British Islam: How Extremist Literature is Subverting Mosques in the UK. It was written by Denis MacEoin and overseen by Policy Exchange's Dean Godson. [1] According to the report, which claimed to be 'the most comprehensive academic survey of such literature ever produced in this country', Policy Exchange sent four Muslim research teams to almost 100 mosques across Britain, and found radical material at 25 per cent of the institutions surveyed. [2]The Report's recommendations included calls for the British authorities to reconsider their relationship to the Muslim Council of Britain, the Islamic Foundation and the Muslim Safety Forum.[3]

The report's findings were widely covered in the British media with articles appearing in, for example, The Daily Mail [4], the Daily Telegraph[5] and The Times.[6] According to Newsnight editor Peter Barron, the BBC had originally been due to run an exclusive report on the findings:

On the planned day of broadcast our reporter Richard Watson came to me and said he had a problem. He had put the claim and shown a receipt to one of the mosques mentioned in the report - The Muslim Cultural Heritage Centre in London. They had immediately denied selling the book and said the receipt was not theirs.

On closer examination, the BBC identified particular concerns about five of the receipts in particular: 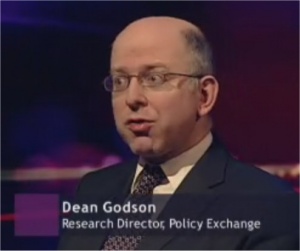 On 12 December 2007, Newsnight ran a report on these concerns, followed by a studio discussion between Jeremy Paxman and Dean Godson, during which Godson accused Barron of 'disastrous editorial misjudgement' and of 'appalling stewardship of Newsnight'. [8]

An initial statement on 12 December, 'the executive of Policy Exchange will meet on Thursday 13th to discuss legal action against the BBC'. [9]A second response the next day stated that 'Policy Exchange is in legal consultations about action in this matter.'[10]The BBC responded: 'Policy Exchange's statement is misleading in many ways and doesn't answer the simple question raised by Newsnight's film. Given that the Policy Exchange report was based on the testimony of the researchers who gathered the receipts, do they believe all the receipts are genuine?'[11]

In the Daily Telegraph on 15 December, Policy Exchange Chairman Charles Moore accused Peter Barron of questioning the receipts in order to justify his original decision not to run the report.

Given that the report was being published that night, the obvious thing for Newsnight to do was to broadcast Policy Exchange's findings at once, allowing the mosques to have their say about the receipts.

There was no need for Newsnight to claim "ownership" of the report. Instead, the editor, Peter Barron, decided to run nothing. His decision meant the Policy Exchange report was not touched by the BBC at all.[12]

On 17 December, The Times issued an apology to Dr Muhammad Abdul Bari of the East London Mosque in connection with its coverage of the report.[13]

In February 2008, Private Eye reported that 'furious Conservatives say they've no option but to sue or take a dossier on Peter Barron, Newsnight's editor, to the BBC's senior management.'[14]In a letter in the following issue, Barron responded 'Policy Exchange promised to investigate these discrepancies, but two months later they have still not said if they believe these receipts are genuine.'[15]

In March 2009, the report appeared to have been removed from the Policy Exchange website, where the following statement appeared:

The Hijacking of British Islam:

In this report we state that Al-Manaar Muslim Cultural Heritage Centre is one of the Centres where extremist literature was found. Policy Exchange accepts the Centre’s assurances that none of the literature cited in the Report has ever been sold or distributed at the Centre with the knowledge or consent of the Centre’s trustees or staff, who condemn the extremist and intolerant views set out in such literature. We are happy to set the record straight. [16][17]

In September 2008, the North London Central Mosque issued a writ in the High Court over the report's allegations. [18] The case came to the High Court in December 2009 but was struck out by the Judge on the basis that the Trust could not sue in defamation as it was not a corporate entity or legal person. [19]