University College London is part of the University of London.

Details of courses and modules

UCL teaching an MSc in Countering Organised Crime and Terrorism. The course is aimed at security professionals and is delivered by practitioners and researchers working in counter-terrorism, intelligence, law enforcement, risk assessment and security technology.

On 26 December 2009 Umar Farouk Abdulmutallab, a former student at University College London, was charged for allegedly attempting to detonate an explosive on a plane as it came into land in Detroit on Christmas Day. [1] The media soon reported that Abdulmutallab had attended UCL, a fact confirmed by the university. [2] Abdulmutallab had studied at the UCL faculty of engineering where the university’s MSc in Countering Organised Crime and Terrorism is now taught. [3]

A number of right-wing commentators subsequently attacked the university, claiming that Abdulmutallab had been ‘radicalised’ at UCL and implying that the university was in some way to blame for the attempted bombing. The attacks were led by the Daily Telegraph with similar arguments being advanced in the Observer, The Times, the Daily Mail and the tabloid press. Whilst these attacks did not relate the teaching of terrorism at UCL, they nevertheless represented an attack on freedom of expression and association in universities and included calls for the monitoring, and in some cases repression, of Muslims and Muslim groups on campus from right-wingers like Douglas Murray and Anthony Glees.

On 28 December 2009, the Daily Telegraph published an article by Douglas Murray, the director of the Centre for Social Cohesion and author of Neoconservatism: why we need it. Murray wrote:

British universities have been a hub of the global Islamic terror threat for more than a decade.

In the Nineties, the London School of Economics enrolled, among other future terrorists, Omar Sheikh. In 2002, he kidnapped and beheaded Daniel Pearl, the Wall Street Journal reporter.

In 2003, two students at Kings College London carried out a suicide mission at Mike's Place, a bar in Tel Aviv. There are many examples of Muslim students who have followed the same path - for whom British universities have provided an ideal environment to foster their violent opinions.

This is because university authorities refuse to admit they have a problem. In doing so, they have abandoned the duty of care they owe their students and the duty they owe the British taxpayers who pay their wages. [4]

On 30 December 2009, the Daily Telegraph’s executive foreign editor Con Coughlin complained in his blog that, ‘Even though Abdulmutallab is not even a British citizen, he was still allowed to be elected president of the Islamic Society at University College London (UCL) … The authorities at UCL should hang their heads in shame – or better than that, perhaps they should resign?’ [5] Further unsubstantiated criticism of UCL appeared on page 8 of the Daily Telegraph that day in an article based entirely on quotes from Douglas Murray and the right-wing academic Anthony Glees. [6] Murray was quoted as saying:

UCL has not just failed to prevent students being radicalised, it has been complicit. If any other society invited someone to speak who encouraged killing homosexuals, that society would be banned, but academics are afraid of taking action when it involves Islamic societies in case they are accused of Islamophobia.

Murray’s sentiments were echoed by Glees, who said: ‘All British universities must look at their Islamic societies and demand assurances that no radicalisation will be allowed. If they can't give those assurances, they should be disbanded.’ [8] 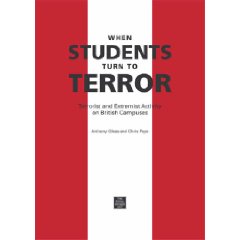 When Students Turn to Terror, Anthony Glees’s 2005 report for the Social Affairs Unit.

In August 2005 Glees had co-authored When Students Turn to Terror: Terrorist and Extremist Activity on British Campuses – a report for the right wing Social Affairs Unit. The report argued that British universities were, in Glees's words, 'recruiting grounds for those who wish to destroy parliamentary liberal democracy'. [9]

When Students Turn to Terror had already been cited by Melanie Phillips in her Daily Mail column on 29 December. Her article had also cited (and misrepresented[10]) data from a report by Murray’s Centre for Social Cohesion. [11]

Glees was quoted in The Times the same day as the aforementioned Telegraph article. The Times noted that whilst president of the Student Islamic Society at UCL, Abdulmutallab had organised a ‘War on Terror Week’; inviting guest lecturers to speak on war and human rights. The Times took this as evidence that ‘during his years in London [Abdulmutallab] was heavily involved in radical political activity’. [12] In the article Glees again claimed, without evidence, that Abdulmutallab had ‘turned to al-Qaeda’ whilst a student in London. [13]

Under pressure from the right-wing press, UCL published a response. On 31 December 2009 the Times Higher Education published an article by Malcolm Grant, the president and provost of UCL, under the headline ‘Freedom of thought is all we foment’. Grant wrote that the university would not accept ‘restrictions on freedom of speech’ and would ‘continue to allow our students to form clubs and societies for all legitimate pursuits, and encourage the vigorous debate, disputation and criticism that is central to the very concept of a university.’ He criticised the reaction of the UK press, citing the Daily Telegraph in particular, and referred to an ‘astonishing lack of comprehension on the part of some of our news media – and no doubt far more widely – about the unique character of universities as institutions where intellectual freedom is fundamental to our missions in education and research.’ [14] 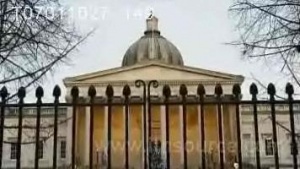 Still from an ITV news bulletin from 7 January 2010 showing the UCL main building. The film voiceover stated: ‘The Yemeni Government say Umar Farouk Abdul Mootallab became involved with Al-Qaeda while he was studying at University College London between 2005 and 2008.’

Attacks on the university continued. On 2 January 2010 the Daily Telegraph published an article by the author and journalist Ruth Dudley Edwards, dismissing the provost’s statement. She wrote that UCL ‘busily seemed to wash its hands of any responsibility for fostering a suicide bomber’. She claimed: ‘The truth is that a mixture of greed, knee-jerk Left-wingery, anti-Semitism and pusillanimity have combined to make our universities breeding grounds for Islamism.’ She concluded: ‘If vice-chancellors of universities that contain festering ideological cesspits do not clear them out, they should be replaced.’ [15] The same day the Telegraph’s website posted an article detailing guest speakers at student Islamic Societies in British universities including UCL, which it said would raise ‘concerns of whether university authorities have taken sufficient measures to prevent violent extremism on campus.’ [16] The report, which cited the Centre for Social Cohesion and the Quilliam Foundation, was also printed in the Sunday Telegraph the next day. [17]

In March 2010 Rosie Waterhouse, the director of the MA in investigative journalism at City University London, wrote in the Independent that in 2009 she had approached Malcolm Gillies, then Vice-Chancellor and President of City University London, to say that she was 'concerned about the activities of the Islamic Society'. 'Several research papers and Ed Husein's [sic.] alarming book, The Islamist', she wrote, 'suggested that certain British universities, including City, were potential recruiting grounds for violent extremists.' [18] Waterhouse also wrote that she was 'particularly disturbed by the sight of Muslim female students wearing the niqab' which she said she found 'offensive and threatening' and which she said should be banned at universities. [19]

On 31 December 2009 UCL’s president and provost Malcolm Grant announced that he was, ‘setting up a full independent review of Mr Abdulmutallab’s time at UCL.’ [20] Later it was also announced that Grant would chair a panel on the prevention of ‘radicalisation’ at British universities established by the vice-chancellors' umbrella group Universities UK (UUK). [21]

The controversy also led to the scrutiny of UCL students by police. The Observer reports that: ‘British police are known to be concentrating on his time at UCL. They are believed to have sought access to computers, and have contacted former members of the Islamic Society.’ [22]

According to the response of this University to the initial four part teaching terrorism FOI request, the answer to all four questions was 'no'[23] . The four questions being: