Steve Tatham is a Naval Officer and expert in military public relations and strategic communication. He was a public spokesman for the British Military in Sierra Leone (2000), Afghanistan (2001-2002) and Iraq (2003).[1] He was the Director of Communication Research at the UK Defence Academy's Advanced Research and Assessment Group and is a leading proponent of the doctrine of strategic communication.[2] In 2009 he was seconded to the Joint Intelligence Organisation in the Cabinet Office on "advanced Horizon Scanning Research on the UK National Security Strategy (2) project".[1] According to the Cabinet Office this refers to the Strategic Horizons Unit of the Joint Intelligence Organisation.[3] 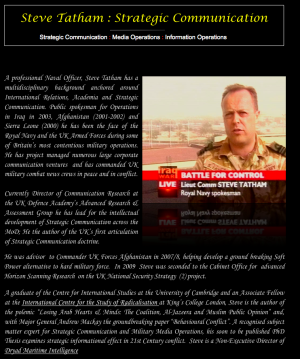 Homepage of 'stevetatham.net' the personal webpage of Steve Tatham before all content was removed from the page in late 2010. Screengrab taken 4 March 2010

Tatham's primer has been followed by the roll out of a Strategic Communication education program across all UK Staff Courses. Trialed initially on the UK's Tri-Service Warrant Officer's course - where the concept was warmly welcomed - it has subsequently been rolled out to the initial (8 week) staff courses (for Lieutenants and Captains), the Advanced (1 year) staff course (for Majors and Lieutenant Colonels) and the Higher Staff Course for very senior officers. [6] 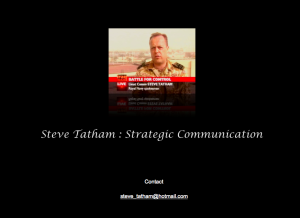 Homepage of 'stevetatham.net' the personal webpage of Steve Tatham after all content was removed from the page in late 2010. Screengrab taken 10 February 2011