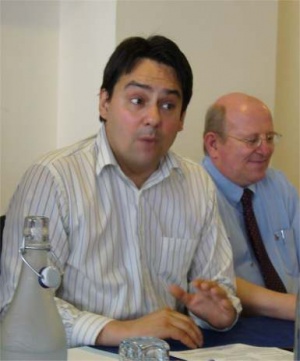 Stephen Twigg, Chairing a seminar run by the Foreign Policy Centre at the Compass Conference (Mike Gapes, MP, in the background), 17 June 2006

Stephen Twigg (born December 25, 1966) is a British politician and former Labour Member of Parliament for Enfield Southgate. In the 2001 election he held the seat with an increased majority of 5,546, second place going to Conservative John Flack. Following the 2001 election, Twigg was appointed Parliamentary Secretary to the Leader of the House of Commons, Robin Cook, and in 2002 became a junior minister in the Department for Education and Skills. In 2004, in the government changes following the resignation of David Blunkett, he was promoted to Minister of State for school standards.

In the 2005 election, Twigg lost his seat to the Conservative Party candidate, David Burrowes, by a margin of 1,747 votes. This was a surprise loss for the Labour Party, much in same way as the seat was won from the Conservatives in 1997. During his concession speech, Twigg claimed that he would not be the last Labour MP for Enfield Southgate.

Twigg is the former Chair of Labour Friends of Israel and has visited Israel on an LFI sponsored trip.