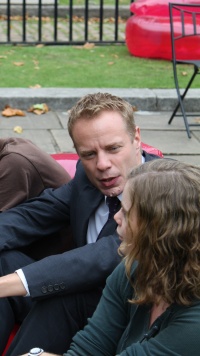 Stephen Gilbert was the Liberal Democrats MP for St Austell and Newquay from 2010 to 2015 and the parliamentary private secretary to Ed Davey, the secretary of state for the UK Department of Energy and Climate Change, from 2012 to 2015. [1] [2] In the 2010 election Gilbert was elected in with a majority of 1,312. [3]

Gilbert lost his seat in the 2015 general election, after the Liberal Democrats won only eight seats. He lost to the Conservative Party's Steve Double by 8173 votes.[4]

Gilbert joined the Liberal Democrats in 1992 and thus became Cornwall's youngest ever councillor in 1998 aged just 21. He went on to work as a researcher for Welsh MP Lembit Opik and Cornwall's former MEP Robin Teverson. [1]

Between 2000 and 2005 Gilbert worked in the City of London advising the fund management industry. While in London he also served as a councillor on the London Borough of Haringey until 2005. [1]

Gilbert studied International Politics at the University of Aberystwyth in 1995 and then went on to study a Masters' degree at the London School of Economics in 1999. [3]