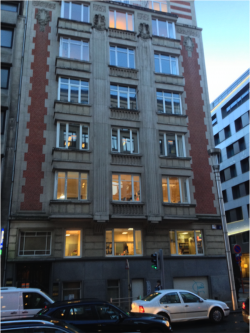 Sovereign Strategy Ltd. is a UK policy and lobbying shop, with strong connections to the Labour Party. Alan J Donnelly, Sovereign's Executive Chairman, is a former Labour Party Leader in the European Parliament [1].

The company has grown a lot over the previous five years, we started off with a £40,000 contract, operating from a converted bathroom in my house in South Shields, and now we've got offices in Brussels and Trafalgar Square, as well as one in the north east. We're expanding our office in Brussels and we have a new affiliate in the USA.[2]

More recently, Donnelly has been a frequent visitor to the Gulf, including Kuwait, Bahrain, United Arab Emirates and Saudi Arabia.[3]

In the past, Sovereign has made much of its links with the Labour Party. In November 2004, every photograph on its website was either of a senior Labour Party figure, or taken at a Labour Party event.[4].

According to documents obtained by the Guardian under the Freedom of Information Act, Cunningham gave the corporation confidential advice about two bills going through parliament which affected the authority. In one of the bills, the corporation opposed plans to give Ken Livingstone, the London mayor, greater powers in planning matters on the grounds that they would damage the City. He also faced questions over his apparent failure to declare his consultancy with the corporation in the House of Lords register of financial interests.[5]

The entry in the Register of Members's Interests for Tony Blair's election coordinator Alan Milburn also reveals that sometime in 2004, Sovereign Strategy paid him between £5,001 and £10,000 for a "speech and follow-up internal roundtable" [6].

Donations to the Tories

In 2011 Sovereign reportedly gave £11,000 to the Tories. The Daily Mail criticised the Conservative Party for risking scandal by accepting 'piddling bungs' lobbyists, in this case a firm that represents the Kuwait National Petroleum Company and a business run by one of Kuwait’s richest families. [7]

In February 2010 the lobbying firm was accused by The Times of involvement in a "cash-for-access" operation to serving Labour ministers. The North East Economic Forum, run by Sovereign Strategy, organised a networking event with three ministers on the margins of a regional Cabinet meeting. Businessmen were charged £5,000 to attend. [8]

The Sunday Times reported in 2006:

David Miliband, the new environment secretary, is embroiled in a sleaze row this weekend over his links to a nuclear industry lobbyist.

The lobbyist — Alan Donnelly — chairs the minister’s local constituency party. He also helped to pay for the refurbishment of Miliband’s constituency party headquarters in Newcastle. The cabinet minister has appeared at events organised by the lobbyist...

Sovereign Strategy, Donnelly’s lobbying firm, represents the US multinational Fluor, one of the world’s biggest nuclear companies, which is hoping to win a stake in the £70 billion British nuclear waste market.

Senior Fluor executives and government ministers, including Blair, have attended events organised by Sovereign Strategy. The lobbying firm’s marketing material boasts that it provides “guidance on legislation issues in the field of environmental performance”.

Documents show that Sovereign Strategy paid £2,000 for building works at a terraced house in South Shields, Tyneside, which serves as headquarters of the local Labour party and contains Miliband’s constituency office.

The building was refurbished last year although Donnelly said yesterday that his company’s money was used only for improvements to kitchen facilities used by party workers. He had “no idea” whether Miliband used the facilities.

The payment has been declared to the Electoral Commission, which oversees donations and election expenses, but Miliband has not declared it in the Commons’ register of members’ interests as is normal practice for MPs receiving financial help in their constituencies.

The Commons rules state that any “donation received by a member’s constituency association which is linked either to candidacy at an election or to membership of the House” must be registered.[9]

In an interview with Euractiv in May 2005, Donnelly was asked:

I'm the official representative for Max to Formula One. I go to a lot of the grands prix, and basically my job is to brief Max on the politics in the paddock, and, as I say, that's probably more political than most national parliaments. I also advise him on the politics in the host country and how that affects the races. The FIA President meets the top ministers from the countries where F1 lands. We also give the FIA a full government and European affairs service.[10]

Richard Caborn, the sports minister, has been fantastically supportive of the project. He spent a lot of time brokering agreements between different people. The East Midlands Development Agency has also been wonderful in terms of viewing Silverstone as a potential centre of excellence. We're pretty hopeful that the message we've tried to put across, that Silverstone needs development, has been understood.

In response to a FoI request on meeting between the DCMS and Sovereign Strategy in the previous year (issued 19 September 2005) the DCMS stated:

'there were two meetings between Richard Caborn and Alan Donnelly during the past 12 months: 23 November 2004 and 11 July 2005. Discussions at these meetings covered the following issues: a) an update on Silverstone and the potential development of the site b) the future of Formula 1 in the UK; and c) safety in motorsport.[11]

The register of consultant lobbyists documents those clients on behalf of whom Sovereign Strategy has met with government ministers, and the firm's listings since 2015 are as follows: