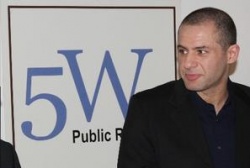 Ronn D. Torossian is the outspoken and controversial chief executive of 5WPR public relations company in New York. His clients range from Baywatch actress Pamela Anderson and rapper P. Diddy to the Government of Israel.[1]

In 2004 Nathanniel Popper reported on the PR man's clients:

But the 29-year-old publicity guru was unable to attend the pop singer’s exclusive soiree. Instead, Torossian was in Washington, D.C., with a different kind of celebrity: Israeli minister of tourism Binyamin Elon, a member of the right-wing National Union Party. The roster of clients at Torossian’s firm, 5W Public Relations, stretches across all cultural boundaries. In addition to Elon, whose American touring he oversees, Torossian’s clients include both the Christian Coalition of America and Bad Boy Worldwide Entertainment Group, the business arm of rap impresario Sean “P. Diddy” Combs’s hip-hop empire. The worlds through which Torossian passes during his daily rounds are diverse, but in Torossian’s presence, the seams between hip-hop and conservative politics seem to disappear. Torossian calls himself “a Jewish bad boy from the Bronx,” and his fighting attitude makes everything fit together. The political figures he works with tend to stand to the far right of the political spectrum — expressing sentiments consistent with Torossian’s own days as a rough-necked agitator in Israel, when he was escorting bulldozers into East Jerusalem to help force out Palestinian residents.[2]

Torossian has also acted as a spokesperson for Aish HaTorah, an international Jewish Orthodox organisation that staunchly defends Israeli policies and features pro-settlement articles on its website. The Tampa Bay Times reports that Aish HaTorah has close ties to the virulently anti-Muslim Clarion Fund, which was behind the notorious anti-Islam film Obsession.

Torossian once told writer Jeffrey Goldberg of The Atlantic magazine, "I think we should kill a hundred Arabs or a thousand Arabs for every one Jew they kill," adding that: "If someone from a town blows himself up and kills Jews, we should wipe out the town he’s from, kill them all." [3]