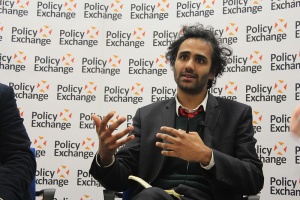 Rohan Silva was senior policy adviser to the UK Prime Minister David Cameron[1] from 2010 until June 2013.

He then became 'entrepreneur in residence' at Index Ventures. [2]

He is now co-founder of Second Home and co-founder & chairman of Spacious.[2]

Described as 'the man behind Tech City', Silva was also previously Senior Policy Adviser for the General Election at Office of David Cameron / George Osborne and Economic Adviser to the Chancellor of the Exchequer George Osborne. He played a key role in drafting the coalition document and was reportedly 'very highly regarded by both the Chancellor and his cabinet colleagues'. [3]

Born in Wakefield, Silva studied law at Manchester and worked as an intern for Labour MP Nigel Griffiths. Journalist Josh Neicho reports that "Reading Popper and Isaiah Berlin for his Masters at LSE made him suspicious of Left-wing utopianism". "A natural supporter of the coalition who some see as a political chameleon", he is purportedly also "a protégé" of spindoctor Steve Hilton.[4]

Silva was ranked 39th (a place held jointly with Matthew Hancock and Rupert Harrison) in a list of the 'Top 100 most influential Right-wingers' by The Telegraph in October 2009. At this point, Silva, Hancock and Harrison were advisers to then Shadow Chancellor George Osborne.[5] By October 2011 his ranking was number 19, ahead of both Hancock (number 20) and Harrison (number 25). The Telegraph described him as having a 'very political, forensic brain and fizzes with new ideas'.[3]

In an article examining the Conservatives' "trick" of "appearing progressive and yet Thatcherite", New Statesman journalist Steve Richards mentions Silva as a case in point:

[Silva] briefly worked for a Labour MP and switched sides on the assumption that the current Tory leadership was serious about its proclaimed progressive objectives... [He has] shown interest in the work of Phillip Blond, the so-called Red Tory who is about to launch his own think tank.[6]

Silva was also senior policy adviser for the 2010 General Election. Prior to this, he was a policy analyst at HM Treasury. He sits on the advisory panel of the Progressive Conservatism project at the think tank Demos.[9]

Silva is a trustee of the Battersea Arts Centre and the Citizenship Foundation.[10]