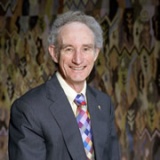 Robert (Bob) May succeeded Sir Aaron Klug as President of the Royal Society in December 2000. Prior to that, May was the UK government's chief scientific advisor (1995-2000). He received a knighthood in 1996 and was subsequently made Baron May of Oxford. He has been based, like Sir John Krebs, in Oxford University's Zoology Department since 1988. He is a Royal Society research professor specialising in mathematical biology.

As chief scientific advisor, May is regarded as having helped to build the case for the year-on-year real terms increases in science's budget that were won from the Treasury by Tony Blair's Science Minister Lord David Sainsbury. May also pursued a public agenda of seeking more openness about the scientific advice the government received. As one admiring article put it, 'During May's tenure the whole structure of scientific advisory committees was revised to include bodies that had a more strategic position on issues such as food safety and human genetics, and that included members from a broader range of backgrounds. At the same time he issued guidelines establishing openness rather than secrecy as a fundamental principle of their activities. Far from dismissing the anti-science attitudes of animal welfare, consumer, or anti-capitalist organizations, May believes that societies should engage the full range of views in the debate about what kind of world we want to live in.' He retired from being the President of the Royal Society in December 2005.

Before his retirement from the RS, Lord May was another leading scientist who argued that it was "wishful thinking" that Britain could meet its energy needs with renewables alone. "The truth is that it will be difficult for Britain to lead the way on climate change in the mid-term future without building new nuclear power stations," he wrote in his Daily Telegraph opinion column in September 2004. [1]

However, although this may have been May's public agenda for regaining the public's confidence after the BSE debacle, there is evidence of his involvement in a covert strategy to undermine the public credibility of scientists and scientific research raising questions about GM.

After Dr Arpad Pusztai went public with his doubts about the safety of GM foods, followed by the publication in 1999 of the British Medical Association report calling for an indefinite moratorium on GM crops, no less than four reports on biotechnology were rushed out in the space of just two days. All trumpeted the safety of GM foods and crops, and all condemned Pusztai's research, which suggested the opposite. The first report was by the government's chief scientific advisor, Robert May, and its chief medical advisor, Prof Liam Donaldson (the May/Donaldson report). The others were from the House of Commons Science and Technology Committee; the Royal Society, of which may was then a leading Fellow; and the Nuffield Council on Bioethics report.

These were four reports containing one theme and this conveniently timed package enabled Blair's then 'Cabinet Enforcer', Dr Jack Cunningham, to announce that Dr Pusztai's work had been 'comprehensively discredited.' Sir Robert May added that Dr Pusztai was guilty of 'violating every canon of scientific rectitude' by speaking publicly about his results before the paper had been peer reviewed and published.

Can you believe that four major reports could come out, all condemning me, within two days? That is stretching belief. It's clear that there was a concerted effort to discredit me... In 1956, when I was living in Hungary, I got a Ford Foundation Scholarship and they said I could go wherever I wanted. I chose England because I thought the British were fair, and that they would tolerate even an oddball like me. But then I found out about these machinations and duplicity... I made my 150-second testimony on TV's World in Action because I had facts that indicated to me there were serious problems with transgenic food. It can take two to three years to get science papers published and these foods were already on the shelves without rigorous biological testing similar to that of our GM potato work. I did indicate my concern and it cost me my job.[2]

May subsequently apologised to Pusztai for the personal attack he'd made on him but this was a private apology and there was no public retraction. Nor has he expressed any such outrage at the numerous examples of pro-GM scientists who make claims for the benefits of GM food based on faith and opinion rather than peer-reviewed data. May also publicly criticised the Prince of Wales for visiting Dr Pusztai without making a visit to hear the views of the Royal Society. (Whitehall adviser attacks Charles)

When President of the Royal Society, May pursued a similar strategy of calling for openness and balance in public while quietly continuing the campaign to promote GM and undermine its critics. Thus, when the UK's Public Debate on GM was announced in autumn 2002, May called for a rational, open and questioning public debate about GM crops. At the same time he cautioned against 'Fundamentalist' lobby groups that 'know, by dogma, instinct or political ideology that GM crops are bad, and the scientific facts are irrelevant'. (Royal Society Press Release)

While May called for the public to have an open mind and to steer clear of dogma, his own mind and that of the Royal Society seemed entirely made up. The Director of Sense About Science, meanwhile, is part of the fervently pro-GM, pro-cloning Living Marxism network.

In a Wall Street Journal investigation into the declared interests of House of Lords peers, May said he is no longer on the HSBC advisory board, and that during his time on the board he spent much of his energy advocating that women be promoted to senior positions.[3] Despite this claim, the role had not been removed from his parliament profile as of 16 February 2015, a week after the political firestorm over the disclosure of HSBC's Swiss subsidiary's activities.[1]