Robert Fleming & Co. was a London-based asset manager and merchant bank founded in 1873[1] and sold to Chase Manhattan Bank[2] for over $7 billion in April 2000.[3][4][5] At the time of the sale it had a controlling interest in the highly successful Asian investment bank Jardine Fleming. It also had 7,800 employees and operations in 44 countries.[6][7]

The firm of Robert Fleming & Co., known as Flemings, was founded in Dundee, Scotland in 1873 by Robert Fleming, a successful manufacturer of jute fabrics used for sandbags in the American Civil War. The firm was originally formed as a series of investment trust, pooling money from Scottish investors into overseas ventures, and later moved into merchant banking. In 1900 the firm moved to London.[8]

In 1970, Flemings entered into an investment banking joint venture with Hong Kong-based Jardine Matheson, forming Jardine Fleming. The tie-up was prompted by the long-standing family links between the Flemings and the Keswick family of Scotland, who have run Jardine Matheson since its founding.[9]

An "enigma": Military and intelligence links

An article in MoneyWeek describes the history of Robert Fleming & Co.:

For the best part of a century, Robert Fleming & Co remained in the investment trust business, says the FT. Although it later moved into merchant banking, "it differed radically from other merchant banks", where banking was the core business. Privately held throughout its existence, Flemings was always "something of an enigma". The group published little information about itself and questions about strategy "met with the quizzical look of the classic British amateur". But although it remained old-school in style, it was the "boldest and most far-sighted of any institution in the Square Mile". Connections helped: the 1970 Jardine Fleming Hong Kong venture, which established the group in the Far East long before competitors got there, was prompted by the long-standing family links between the Flemings and the Keswicks, who run Jardine Matheson.[10]

Another sense in which the bank was an 'enigma' is that it had strong associations with the British military, including special forces, as well as with the intelligence services. In 1992 Peter de la Billiere, former commander in chief of the SAS and then UK Special Forces, and commander of the British land forces in the Gulf war, was appointed a non-executive director of Robert Fleming & Co., a post he retained for seven years.[11][12] Rupert Wise, described in the Daily Telegraph as 'The banker with a CV out of a spy novel'[13] became managing director of its Middle East division in around 1984; and Mark Bullough, who went on to co-found the mercenary company Aegis Defence Services with Lt Col Tim Spicer, worked at Robert Fleming & Co. for 20 years.[14] Dominic Armstrong was Bullough’s deputy at Jardine Fleming, the subsidiary of Robert Fleming and Co. in Malaysia.[15] Bullough and Tim Spicer had been comrades in the Scots Guards and had fought together in the Falklands. Both Spicer and Simon Mann, the mercenary jailed for his part in the failed coup in Equatorial Guinea, and de la Billiere had also worked closely together. So Flemings looks like a bolthole or temporary perch for intelligence connected/special forces people.

One person who apparently does not fit this description is the BBC journalist Frank Gardner, who took over the Bahrain office of the bank after Rupert Wise and worked in the post 1986-95.[16] Gardner has publicly stated that he rejected an invitation to join MI6 before he graduated from Exeter University.[17]

The right wing historian Andrew Roberts also reportedly turned down an MI6 recruitment attempt. While at Cambridge, Roberts was approached to join the 'FCO Co-ordinating Staff', a euphemism for [MI6]. He went through the selection process, but decided not to join. [18] He later joined Flemings too.[19] 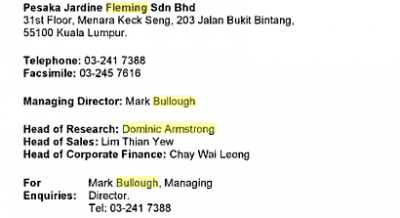 Screengrab showing the Mark Bullough and Dominic Armstrong worked together at Jardine Fleming in Malaysia.[20]

In 1997, Robert Fleming Holdings had operations in 44 countries in Asia, Eastern Europe, the Americas and Africa. Its net assets as for the 1997 fiscal year were £841 million and its profit before tax for the year was £136.1 million. Its global asset management business managed £63 billion on behalf of institutional and private investors around the world. These results included Jardine Fleming, which in its own right had operations in 15 countries in the Asia-Pacific region, seats on 20 stock exchanges and some US$19.7 billion in funds under management. Jardine Fleming’s profit before tax for the year was US$41.4 million.[22] The firm’s significant transactions included the privatization of state-owned Pakistan Telecommunication Co. Ltd. in 1994.

Through its history, the firm wore its Scottishness on its sleeve. In addition to being controlled by the Scottish Fleming family, there were other signs of its Scots heritage. A bagpipe player regularly greeted visitors at its London headquarters until 2000. In the 1990s, its main non-Fleming family backers were Scottish institutions such as Baillie Gifford and Stewart Ivory. The firm also owned the most extensive private collection of Scottish art in existence, removed to an art Foundation, The Fleming-Wyfold Art Foundation, created to protect the art works and prevent any buyers of the failing bank from selling off the collection.

The Fleming name was tarnished by a scandal in 1996, when Jardine Fleming was ordered to pay $19 million to fund investors for alleged abusive and unsupervised securities allocation practices by asset management head Colin Armstrong. The 1997 Asian crisis severely hit both Robert Fleming and Jardine Fleming. Robert Fleming was forced to approve massive lay offs in late 1998. The firm restructured in 1999, buying the remaining 50% stake in Jardine Fleming in return for giving Jardine Matheson an 18% stake in Robert Flemings Holdings.[23] However, despite these efforts, Flemings continued to see its investment banking and asset management market share decline as global investment banks like Morgan Stanley and Lazard moved into their markets.[24]

In April 2000, Robert Fleming Holdings was sold to Chase Manhattan Bank for $7.7 billion (then £4.5 million).[25] Although the sale came about as partially as a result of Fleming's weakened position, it was part of two larger trends: consolidation in the financial services industry as large U.S. commercial banks acquired investment banks upon the repeal of the Glass-Steagall Act, and the sale of UK merchant banks to foreign banks. Flemings, with almost no US assets, was considered a particularly good fit for increasingly globally-minded Chase, whose assets lay largely in the United States. In the sale about 130 Fleming family members pocketed approximately $2.3 billion for their 30% stake. When Chase merged with JP Morgan in 2002, the Fleming asset management business was rebranded J.P. Morgan Fleming.

The members of the Fleming family have since set up an asset management company, Fleming Family & Partners, chaired by former Morgan Grenfell head John Craven. In 2005, they sold 20% of the business to Standard Chartered Bank, a venerable Hong Kong institution like Jardine Matheson, for £45 million. The bank business of Jardine Fleming was bought by Standard Bank, a large South African bank, in 2001.