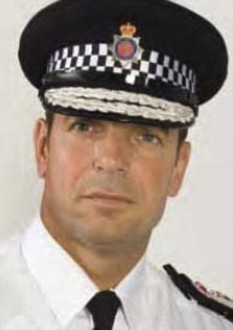 Richard Thompson headed the Civil Nuclear Constabulary from June 2007[1] until 2012.

Although the Constabulary described him as a senior diplomat at the Foreign and Commonwealth Office, The Times reported that Thompson was former senior MI6 officer, who had served in Kosovo and as station chief in Baghdad.[2]

Thompson's appointment as head of the Civil Nuclear Constabulary made him the first civilian chief constable in Britain in more than 50 years, a milestone that The Times anticipated would cause concern among police officers.[3] In October 2009, The Guardian obtained a report by Chief Surveillance Commissioner Sir Christopher Rose which noted that Thompson "has extensive experience in the intelligence world, but no previous police background."[4]

The Mail on Sunday reported in August 2008 that Thompson has been carrying out strategic reviews to prepare for the Civil Nuclear Constabulary's planned expansion into the Critical National Infrastructure Police. This new force would reportedly mount armed patrols around all key installations nationwide, including power stations, phone and computer networks, oil and gas pipelines, ports and airports.[5]