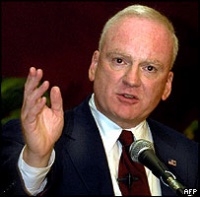 Richard A. Clarke is a former US government advisor on terrorism turned media pundit and security consultant. He is widely praised in the US media for his warnings of an imminent attack on the United States in the run up to September 11th, although he has come under attack from more extreme conservatives for his outspoken criticism for George Bush’s anti-terrorism policy. He is close to journalist turned terrorism expert Steve Emerson.

Clarke subsequently served as a senior White House Advisor for 11 consecutive years.[4] During the administration of George Bush I he was Assistant Secretary of State for Political-Military Affairs and he coordinated diplomatic efforts to support the 1990-1991 Gulf War and the subsequent security arrangements.[5] He was Clinton’s National Coordinator for Security and Counterterrorism during the 1990s. He advocated cruise-missile strikes against a target in Sudan.[6] He also advocated military action following the attack on the USS Cole in October 2000.[7]

In the administration of George Bush II, Clarke was one of the few Clinton aides kept on. He was appointed Special Advisor to the President for Cyber Security.[8] Clarke resigned from the Bush administration in January 2003. He subsequently became a prominent critic of the White House’s handling of counter terrorism.

Clarke is chairman of Good Harbor Consulting where he advises clients on a range of issues including Corporate security risk management, Information security technology, Dealing with the Federal Government on security and IT issues and Counterterrorism.[9]

During the 1990s Clarke became close to Steven Emerson. Although Emerson was discredited by his premature attribution of the 1995 Oklahoma City bombing to Islamic terrorists, he nevertheless “had the ear of Richard Clarke, whom he regularly briefed in the late ’90s”[10] Indeed Clarke revealed in his 2004 book Against All Enemies, that he secretly approached Emerson after the FBI would not provide him on intelligence on terrorists operating in the US. According to Newsweek, Emerson and Rita Katz regularly provided Clarke with briefings, sometimes conducted on a near weekly basis.[11] One specific assignment followed the arrest of an Algerian man on 14 December 1999, who was crossing the Canadian border into the United States. His trunk contained bomb making materials that he planned to detonate at Los Angeles International Airport. This became known in counterterrorism circles as the ‘Millennium Plot’. After the arrest Clarke called Emerson from the White House and asked the Investigative Project for a report on militant Islamic cells in North America. Emerson, Katz, Evan Kohlmann and two other individuals put together the report.[12] Clarke was clearly convinced by the research. He later recalled to PBS:

What happened in the millennium plot was that we found someone who had lived in Boston who was the leader of the planned attack at the millennium in Jordan. We found someone who lived in Canada who was planning a simultaneous attack in Los Angeles. When we started pulling on the strings, what we found was there were connections to people in Seattle, Boston, Brooklyn, Manhattan and other cities throughout the United States. Every time we looked at one of these individuals who looked like an Al Qaeda person, they lead us to someone else who was an Al Qaeda person -- probably, somewhere else in the United States[13]

In a 2002 feature article on Emerson in the Brown Alumni News, Clarke called Emerson “the Paul Revere of Terrorism”.[14] Paul Revere is an American patriotic icon who famously acted as night-time messenger warning of the advance of the British army during the War of Independence. Clarke added that he would attend Emerson's speeches whenever possible because “we’d always learn things we weren't hearing from the FBI or CIA, things which almost always proved to be true”. In Against All Enemies Clarke also wrote that Emerson's book American Jihad “had told me more than the FBI ever had about radical Islamic groups in the U.S.”[15] Clarke and Emerson have the same literary agent, Len Sherman. Sherman is himself an author and documentary maker, and Clarke and Emerson are his only clients.[16]