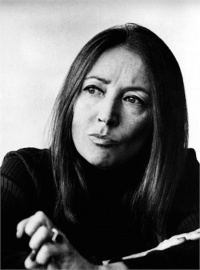 Born into a working-class family, her father was leader of the underground movement in Florence during the second world war and he recruited Oriana, the eldest of his four daughters, as an assistant. She spent much of her childhood with him in the partisan bands, helping Allied soldiers escape through enemy lines.[2]

"You ask me about the contrast between the two cultures? Well, to be honest, it annoys me even to talk about two cultures, to put them on the same plane," Fallaci wrote. "Let's be honest. Our cathedrals are more beautiful than the mosques and the synagogues." What readers got was far more than a cry of outrage. It was a rant that made no distinction between the terrorists responsible for 9/11 and the rest of the Muslim world.

Corriere's publishing arm, Rizzoli, turned the article into a book, La Rabbia e l'Orgoglio (The Rage and the Pride), and within little over a month it had sold 700,000 copies.[4]

Adel Smith, president of the Muslim Union of Italy, sued Fallaci on 8 April 2004,claiming that her book The Force of Reason advocated hate against Islam and Muslims, sometimes by allegedly distorting real historical facts and inventing others. In May 2005, judge Armando Grasso ruled that she should face trial over the accusations.[5]

Canada very nearly hosted Fallaci's last public appearance. Public policy maven Patrick Luciani, a personal friend, had hopes of organizing a private dinner for her this fall in Toronto. Fallaci agreed to address the invited guests briefly but take no questions. Before the event could be put together, however, time had run out for Cassandra. Her last actual public appearance was about ten months ago in New York, at an event chaired by David Horowitz, where she was introduced by the similarly outspoken though far more scholarly commentator, Daniel Pipes. "Wanted for a speech crime in her native country," said Dr. Pipes, "Europe's most celebrated journalist now lives in exile in Manhattan." It was no exaggeration, for Fallaci didn't feel that she could return to Italy until ten days before her death, when her medical condition made legal action against her unlikely.[6]

Oriana Fallaci was clearly strongly motivated to "go against the flow", as witnessed by the resistance "partisan" actions of her early life [7], and her uniquely intimate and challenging interview style [8] and strenuous war correspondence.[9] [10]

Her ideological position on her personal freedom of speech appears to have evolved in the same way as the thinkers of the American Right. [11] As she voiced her fears regarding the changing legal and cultural landscape, she bore no regard to the possible detrimental effects that her freedom of speech may have on the freedoms of others. [12]

[ Translation : "Article 21 of Italian Constitution guarantees the Italian citizen an inviolable right to express freely their thoughts with and the written word." ]

[ The European Arrest Warrant, in fact, was only to cover crimes such as terrorism, murder, kidnapping, the trafficking of drugs, sexual exploitation of children, child abuse, illicit trafficking in arms and nuclear or radioactive material. However, witness the event, eight days after the September 11th, the swing because of the discourse on terrorism : the ineffable European Commission will also add on the crimes of racism and xenophobia and blasphemy and racial discrimination. That is a crime of opinion that the Muslim-loving EU defines in those words...A heretic who, at any time, wherever he is, may be arrested as a delinquent. Arrested and extradited in handcuffs in the country that on the complaint of a Muslim or at the initiative of a Politically Correct magistrate issued the arrest warrant. Extradited and (says the rule) held "in custody for at least four months." ]

She gave the impression that she believed that the rise of multicultural societies in Europe amounted to "Islamofascism", and she played with the fear that this caused. [15] [16]

She opposed a possible imposition of Muslim theocracy, "Eurabia", but to do that, she used language that could be called "hate speech", even though she thought she was acting in liberty to defend freedom :- [17]

"In this world there is room for everybody, I say. In one's own home, everyone is free to do what they please. If in some countries the women are so stupid to accept the chador, or the veil where they have to look through a thick net at eye level, worse for them. If they are so idiotic to accept not going to school, not going to the doctor, not letting themselves be photographed etcetera, well worse for them. If they are so foolish as to marry a prick that wants four wives, too bad for them. If their men are so silly as to not drink beer, wine, ditto. I am not going to be the one to stop them. Far from it! I have been educated in the concept of liberty, and my mother used to say: "the world is beautiful because it is varied". But, if they demand to impose these things on me, in my house… and they do demand it. Osama Bin Laden affirms that the entire planet Earth must become Muslim, that we must convert to Islam, that either by convincing us or threatening us, he will convert us, and for that goal he massacres us and will continue to massacre us. This cannot please us. It has to give us a great desire to reverse roles and kill him. However, this will not resolve itself, it will not be exhausted with the death of Osama Bin Laden. This is because the Osama Bin Ladens number in the tens of thousands now and they are not confined to the Arabic countries. They are everywhere, and the most militant are in the West. In our cities, our streets, our universities, in the nerve centers of our technology. That technology that any obtuse can manage. The Crusade has been underway for a while. It works like a Swiss watch, sustained by a faith and a malice which compares only to the malice of Torquemada when he led the Inquisition. In fact it is impossible to deal with them. To reason with them, unthinkable. To treat them with indulgence or tolerance or hope, is suicide. Anyone who believes the contrary, is deluding himself".

"Fallaci sees the threat of Islamic fundamentalism as a revival of the Fascism that she and her sisters grew up fighting. She told me, “I am convinced that the situation is politically substantially the same as in 1938, with the pact in Munich, when England and France did not understand a thing. With the Muslims, we have done the same thing.” She elaborated, in an e-mail, “Look at the Muslims: in Europe they go on with their chadors and their burkas and their djellabahs. They go on with the habits preached by the Koran, they go on with mistreating their wives and daughters. They refuse our culture, in short, and try to impose their culture, or so-called culture, on us. . . . I reject them, and this is not only my duty toward my culture. Toward my values, my principles, my civilization. It is not only my duty toward my Christian roots. It is my duty toward freedom and toward the freedom fighter I am since I was a little girl fighting as a partisan against Nazi-Fascism. Islamism is the new Nazi-Fascism. With Nazi-Fascism, no compromise is possible. No hypocritical tolerance. And those who do not understand this simple reality are feeding the suicide of the West.” // Fallaci refuses to recognize the limitations of this metaphor—say, the fact that Muslim immigration is not the same as an annexation by another state. And although European countries should indeed refuse to countenance certain cultural practices—polygamy, “honor killings,” and anti-Semitic teachings, for example—Fallaci tends to portray the worst practices of Islamic fundamentalists as representative of all Muslims. Certainly, European countries have made some foolish compromises in the name of placating Muslim residents..."

She appeared to have been both anti-anti-Semitic and pro-Israeli, perhaps conflating the two positions. [19]

She seems to have worked hard to construct her public identity and reinforce it. [20]