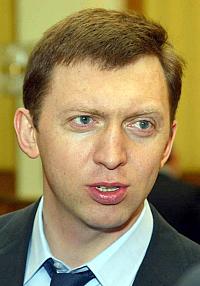 Oleg Vladimirovich Deripaska (born 2 January 1968) is a Russian Oligarch who made his fortune in the aluminium wars of the 1990s. He received his first major break aged 25 in 1994 when the Reuben Brothers helped him to buy the Sayansk aluminium plant via their company Trans-World. The Reubens later fell out with him and sold their Russian aluminium business to Boris Berezovsky and Roman Abramovich, who created the giant Rusal aluminium company together with Deripaska. [1]

In 2008 it emerged that Peter Mandelson had met Deripaska several times and had been a guest on his luxury yacht. Mandelson, who was then European Union trade commissioner, had twice acted to cut European aluminium import duties - legislative changes that The Sunday Times estimated to be "worth up to Pounds 50m a year" to Deripaska. [2]

British intelligence files on Deripaska reportedly include details of his dealings with Mandelson:

UK intelligence agencies opened a file on Mr Deripaska following a series of claims over his alleged links to organised crime in Russia. US authorities are also said to be concerned about Mr Deripaska's dealings.

The oligarch is banned from entering the US. At the request of the FBI in 2006, the US authorities revoked his visa and, despite lobbying, Mr Deripaska has failed to get it reinstated.[3]

Nathaniel Rothschild claimed in a letter to the The Times that the Conservatives attempted to solicit a donation from Deripaska in the summer of 2008.

Sir, Since your paper - along with your sister publication The Sunday Times - has made much out of what may or may not have happened at a private gathering of my friends this summer in Corfu, I thought I should make the following observations. I am surprised that you focus on the fact that one of my guests, Peter Mandelson, is a friend of another, Oleg Deripaska. Not once in the acres of coverage did you mention that George Osborne, who also accepted my hospitality, found the opportunity of meeting with Mr Deripaska so good that he invited the Conservatives’ fundraiser Andrew Feldman, who was staying nearby, to accompany him on to Mr Deripaska’s boat to solicit a donation. Since Mr Deripaska is not a British citizen, it was suggested by Mr Feldman, in a subsequent conversation at which Mr Deripaska was not present, that the donation was “channelled” through one of Mr Deripaska’s British companies. Mr Deripaska declined to make any donation. [4]

Breaking the Climate Deadlock, an offshoot of the The Climate Group fronted by Tony Blair accepted sponsorship from Oleg Deripaska in 2008, under the auspices of Deripaska's company Basic Element. Breaking the Climate Deadlock promotes lowest-cost market based solutions to climate change which allow cheap offsets and encourage public money to fund 'low carbon' technologies. According to a Telegraph article:

“One wonders what interest either Tony Blair or Oleg Deripaska have in climate change given their track records.

“If the policies being pursued by Breaking The Climate Deadlock come to fruition, industry will be given a get out of jail free card.” [5]

Deripaska is represented in London by Portland PR, which is run by the former Blair aide Tim Allan. Portland PR also represent the Russian government.